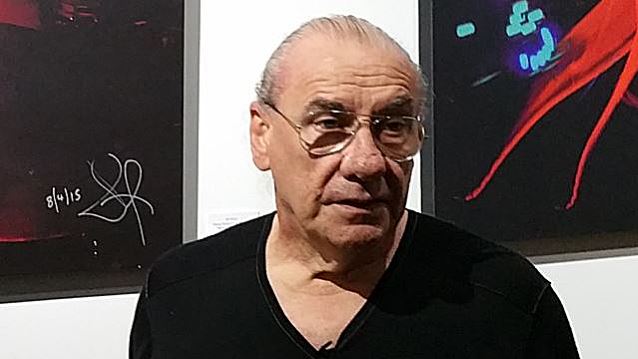 Original BLACK SABBATH drummer Bill Ward says that he still needs to get a "signable contract" from the band and a public apology from lead singer Ozzy Osbourne before he will agree to rejoin the group for one final album and tour in 2016.

Although Ward was initially going to participate in the SABBATH reunion that came together in late 2011, he bowed out early and has not been on good terms with the band since.

Asked by Rhyan of North Carolina's 106.5 WSFL radio station this week if there is any chance SABBATH fans could see him back with the band on their next album and tour, Ward said (hear audio below): "If everybody could get on the same page… My page, I've been quite pronounced about my page, which is a signable contract and an apology over certain issues that Ozzy said about me that weren't true. I'd like him to publicly apologize. He said these things at the public level, so I'd like him to publicly apologize. He's already responded to that, saying that'll never happen. So, as long as that'll never happen, then I probably won't be joining the band in 2016."

Ward went on to describe the mixed emotions that he has felt since he decided to step away from the SABBATH reunion more than three years ago. He said: "Do I love them? Yes, I do. Would I like to play with them? Yes, I would. Am I upset about all the upset? Yes, I am. I'm very, very sad by all the fans' reactions and the way that things have split and gone different ways and everything else. It's not nice at all to be in this position, and it's not an easy responsibility for me to maintain when uncountable amounts of people are angry with my decision-making process, which was that I need a signable contract. And now I need an apology [as well]. First, it was, 'I just need a [signable] contract, guys.'"

Osbourne responded to Ward's open letter with his own statement. He wrote on Facebook back in April: "I never wanted to discuss this in a public forum but Bill's statements left me no option to but to respond honestly."

He continued, "Wow, Bill, what the fuck are you on about? I cannot apologize for comments or opinions I may have made about you in the press during SABBATH's '13' album and tour — physically, you knew you were fucked. Tony [Iommi, guitar], Geezer [Butler, bass] and myself didn't think you could have done a two-hour set with a drum solo every night, so we made the decision to move on. With Tony's condition, we felt that time was not on our side."

Ozzy added: "Bill, stop this smokescreen about an 'unsignable contract' and let's be honest. Deep down inside, you knew you weren't capable of doing the album and a 16-month tour."

Ozzy also pointed out that Ward was in the hospital several times in 2013, including one stint for shoulder surgery that "you've only just recovered from."

Ozzy concluded, "Stop playing the victim and be honest with yourself and our fans. Bill, we go back a long way, let's stop this now before it gets out of hand."

Ozzy told The Pulse Of Radio during the "13" tour that Ward was not in shape to participate. "Bill Ward has got the most physically demanding job of the lot of us, 'cause he's the timekeeper," he said. "I don't think personally he had the chops to pull it off, you know. The saddest thing is that he needed to own up to that, and we could have worked around it, whether we had a drummer on the side with him or something."

Ward was reportedly insulted when SABBATH offered him a contract stipulating that he would only play a portion of the show each night, with another drummer along to take over.

Addressing Osbourne's claim that he was "incredibly overweight," Ward responded, "The truth is that I was overweight for playing onstage, but I wasn't overweight for the studio. I could cut tracks with the weight that I arrived at. All of those guys know that I have a really rigorous exercise regimen."

Ward did reveal his terms for a "signable" contract with SABBATH, saying, "I wanted to earn some better money than we had been (paid) in the past for festival gigs. I think it was somewhere like $80,000 for the festivals, which I can hear everybody gasp now, but $80,000 is not a lot of dough when you're playing festivals."

Brad Wilk played drums on "13", while Tommy Clufetos was behind the kit for the group's world tour.

Iommi and Butler appeared in public with Ward for the first time since late 2011 at the Ivor Novello Awards in London, England on May 21. The members of the legendary metal act were on hand to accept a Lifetime Achievement Award. Iommi accepted on the band's behalf, confirming that SABBATH will embark on a "final tour" next year.

Osbourne was not present at the ceremony, which has celebrated British songwriting and songwriters annually for 60 years.

The "Absence Of Corners" ehibition is a special limited engagement and only hangs at Fathom through August 29.