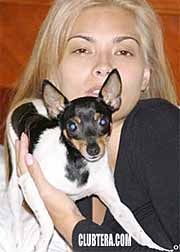 BIOHAZARD frontman Evan Seinfeld and his porn-star wife Tera Patrick had their cherished dog Chopper stolen from Patrick's locked car and are offering a generous reward for the dog's return.

The theft of the five-pound Toy Fox Terrier apparently took place while Tera was mere feet from her automobile talking to friends near the Fashion Center Mall on Riverside Drive in Studio City on January 25.

A $5,000 reward has been issued for the safe return of the small black and white dog with the brown and black face who always accompanies Tera on her busy schedule of events.

"I cannot imagine anybody doing this in a public place and I am appealing to my fans and the public to keep their eyes and ears out for my missing dog", said a distraught Patrick.

"I don't want to have kids at all, so this is my baby," Patrick told the New York Post. "He is my everything. I take him on the set. He's been in magazines. I'll pay $5,000 to get him back, no questions asked. He belongs with me."

Check out a photo of Tera with Chopper.