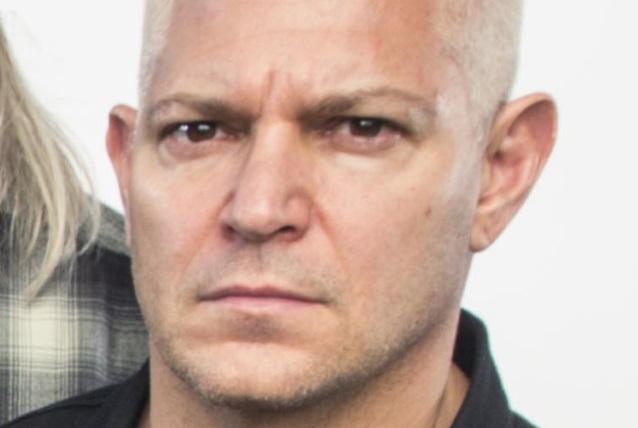 Guitarist, vocalist, and producer Billy Graziadei (BIOHAZARD, POWERFLO) was interviewed on a recent episode of Doc Coyle's (GOD FORBID, BAD WOLVES) "The Ex Man" podcast. Graziadei spoke about how forming BIOHAZARD helped him stay out of trouble in the streets, the band's unique sound and genesis of blending hardcore, metal, and hip hop, how fame and substance abuse tore the band apart, leaving BIOHAZARD and launching punk band SUICIDE CITY, the BIOHAZARD reunion, and how the supergroup POWERFLO came together. A couple of excerpts from the chat follow (transcribed by BLABBERMOUTH.NET).

On BIOHAZARD going from playing huge venues at the height of the band's 1990s success to touring clubs after the band reformed in 2008:

Billy: "The experience of going from the small scene and the small clubs, we never left that behind. So it wasn't like it went to our head. Especially myself and Danny [Schuler, drums], being the core members of the band who were there since the beginning, the ability to always go back to that is so valuable to me. To me, I'll play a [tiny] room and I'm super comfortable. Put me on stage at an arena, and I'm fine with that too. So I can separate the two and there's value in both. Whereas I think, straight up, once Evan [Seinfeld, bass/vocals] got a taste of fucking that arena world, he did not wanna go back to this, and he started to diss it, started to talk shit about it, and we sat there and we were like, 'That's who we are. The arena shit is just a product of our hard work that just reached more people, but stripped down, that's who we are. We are a band that came from hardcore and metal in the roots or fucking small clubs in New York City."

Billy: "Of course. And to me, I think he, in my opinion, lost sight… He really liked it at the beginning and he just got bored of it and he got interested in new things, and those new things were his toys, driving a Hummer, fame and fortune, and that's his choice. I don't fault him for that. I've always wished him well. He left us in some really bad situations, but I never wished anything bad on him. It's a whole another conversation."

Billy: "We toured a lot, spent a lot of time on tour with BIOHAZARD and had some great times, got along so great. Evan was doing his own thing, but we all got along well. And we were, like, 'This is working. Let's do a record.' So we started writing a record. Everything was cool, and then shit hit the fan. Evan got involved in some really hefty, crazy shit and dropped off the face of the earth. We were, like, 'What the fuck?' We were in the middle of doing a record. So we had to finish playing his bass, I sang the parts that he neeed to sing. And were, like, 'What are we gonna do?' And we get these random phone calls about some down-low… some things that were going [down]… It's crazy shit — it's like VH1 'Behind The Scenes' shit. We were concerned with BIOHAZARD. We were, like, so hot being back together and doing a new record, and then the dude is up and gone, living on the lam, hiding out. And then we get a call, he can't do BIOHAZARD — he's done. He quit. So we reach out. And then some shit starts popping up on the Internet, and you can do your research and you find out what I'm talking about. So now he quits, and we were, like, 'How do you fucking quit? Things are going great.' And then we were, like, 'Okay, this is fucked up. Now you fucking really fucking stabbed us in the back.'"

On BIOHAZARD's most recent touring lineup, which saw the band's former guitarist Scott Roberts rejoining the group on bass and vocals:

Billy: "[After Evan left] we talked to our buddy Scott, who played guitar [in BIOHAZARD] right before we split up [the first time]. So Scott came in and played and we played our first show together. We played Download, which wasn't that great. Then we had an offer and we played China, and that was fucking cool. And then we were, like, 'We can do this. Scott fits. It works.' Then it just worked. The band without Evan, in a small, hardcore way, it's like VAN HALEN without David Lee Roth. It was different, it was something new, but it was different. We talked about having Scott sing Evan's parts on [2012's 'Reborn In Defiance'] record, and we were, like, 'You know what? Let that be what it was. It was a reunion. It's the end of the reunion with the original guys of BIOHAZARD.' So we released it. We looked it like it wasn't a beginning of a new era of the band, we looked at it like it was an end of an old era. But we were touring for that record with Scott. And we couldn't do videos, make new photos for the record — everything was just up in the air. But Scott had the fire that we all had, and it just seemed to work, and people accepted him. He was great, he fit great, his vibe was great, he was all about the music, loved hardcore, loved what we did, he was really into it, and it was fucking awesome. So we toured, we kept doing it. And we saw the crowds getting bigger and the people accepted him and the BIOHAZARD name... the brand started growing again; instead of being stagnant or declining, it started to grow. And the shows kept doing better and better. And we were, like, 'Cool. Let's keep this going.' And then we started to work on a new record. And we got into some issues with him. He just grew out of it. He was a fucking rigger in New York in the union, making tons of money, and leaving his family to go on tour for making a little bit of money, it didn't pay for him. So I think that started harboring some issues with him. And eventually we were in the studio doing the new record, and we had some exhanges back and forth, and he quit. And we were, like, 'Fuck! Here we are again.'"