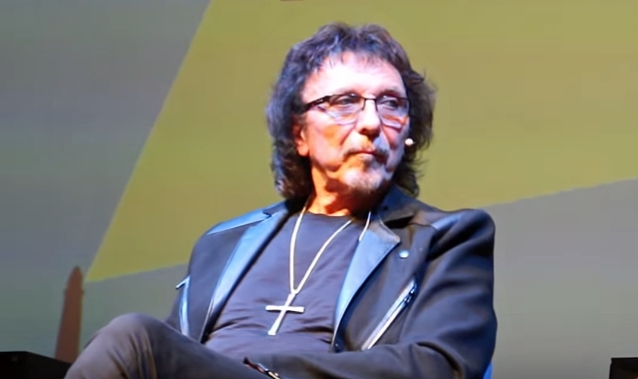 During an question-and-answer session prior to the August 19 screening of BLACK SABBATH's landmark documentary "The End Of The End" at the U.K.'s Whitley Bay Film Festival, guitarist Tony Iommi was asked by presenter Chris Phipps if he is working on any new music at the moment. "I'm still putting stuff together," Iommi replied (see video below). "I'm still writing stuff; I've put ideas down on tapes. When all this nice, sunny weather goes and it gets grim, I shall start going in the studio and putting it down."

He continued: "My engineer, who I had for everything with me at home, he's just done JUDAS PRIEST's album. Now he's finished that, and we'll hopefully start again and put some ideas down. I don't know what it's gonna be yet — whether it'll be an instrumental album. I've been approached by a lot of people to do something with them."

Iommi recently told The List that he is about to begin remixing SABBATH's 1996 album "Forbidden", which features singer Tony Martin, drummer Cozy Powell and bassist Neil Murray, and is often regarded as the band's worst LP. "That's an album I've never been satisfied with, so I'm about to start pulling that apart and remix it," Iommi said.

Iommi underwent cancer treatment throughout the recording of BLACK SABBATH's reunion album, titled "13", and the subsequent tour to promote it. He also successfully went under the knife in January 2017 to remove a noncancerous lump from his throat.