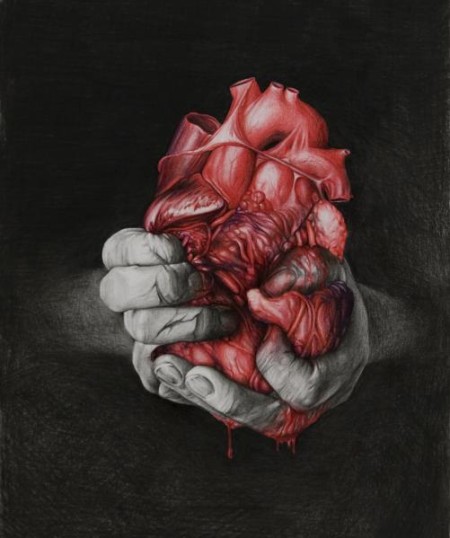 BLOOD MORTIZED — the Swedish death metal band featuring former AMON AMARTH guitarist Anders "Hansson" Biazzi (who played on AMON AMARTH's first two albums, 1996's "Sorrow Throughout The Nine Worlds" and 1998's "Once Sent From The Golden Hall") and CRYPT OF KERBEROS drummer Mattias Borgh — has inked a deal with Chaos Records for the release of the group's "Bestial" EP. The effort was recorded, mixed, mastered and produced by drummer Mattias Borgh at Underworld Recording in Sweden. The four-song EP features artwork by Thomas Kynst and Daniel Devilish and is slated for a June/July 2011 release on both CD and vinyl format.

Commented Borgh: "We are very pleased to work with Chaos Records on this release. They are the perfect label for this EP and we can't wait for the underground monsters around the globe to able to get their filthy hands on the equally filthy 'Bestial' EP!"

A teaser for "The Key To A Black Heart", the forthcoming second album from BLOOD MORTIZED, can be viewed below.

The CD will be recorded at drummer Mattias Borgh's Underworld Recording studio for a late 2011 release. According to the group, "The [new] material is more diverse, displaying a perfect mix of fast songs and heavy as fuck material. Expect unpolished, filthy, dirty, pounding and grinding Swedish death fucking metal deluxe!"