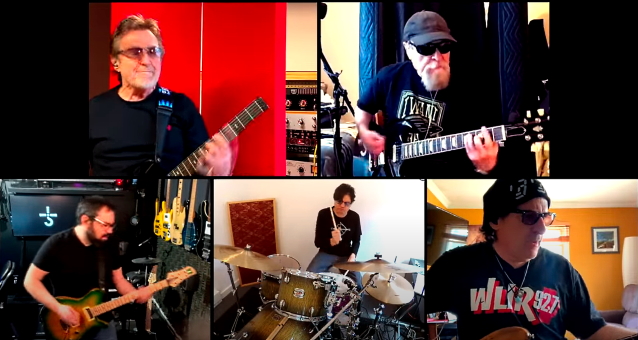 The special performance of the track — which originally appeared on 1977's "Spectres" album — was recorded from each member's respective home and shared by BLUE ÖYSTER CULT on the band's official YouTube channel.

In a statement accompanying the release of the song, BLUE ÖYSTER CULT wrote: "So while 'ON TOUR FOREVER' is temporarily on hold we took a short break from working on our next album to record this from everyone's home studio. Hope we can get back on the road and see you all soon. Meanwhile, stay safe & ENJOY!"

Last year, BLUE ÖYSTER CULT signed with Frontiers Music Srl for the release of the band's next studio album.

With a history spanning almost five decades, BLUE ÖYSTER CULT has a long history of success. They've sold more than 24 million records worldwide, including seven million in the United States alone. Songs like "Burnin' For You", "Godzilla", "Astronomy" and "(Don't Fear) The Reaper" are true classics and staples of the classic rock genre. Often cited as a major influence by some of the biggest names in hard rock and heavy metal (including IRON MAIDEN and METALLICA),BLUE ÖYSTER CULT's sound has evolved through the decades, touching hard rock, heavy metal, progressive, and psychedelic rock. BLUE ÖYSTER CULT is sometimes referred to as "the thinking man's heavy metal band," due to its often cryptic lyrics, literate songwriting, and links to famous authors.