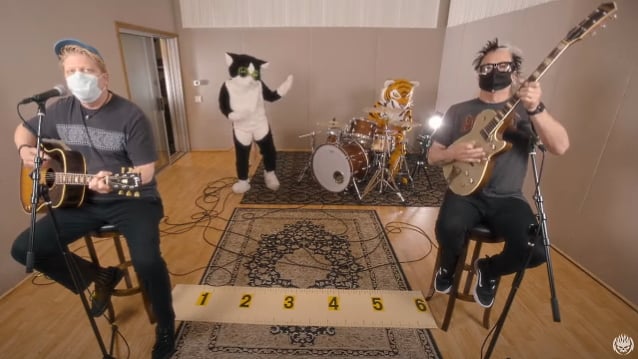 THE OFFSPRING has jumped on the "Tiger King" bandwagon by recording a cover version of THE CLINTON JOHNSON BAND's "Here Kitty Kitty", a song made popular by Joe Schreibvogel — better known as Joe Exotic, the "Tiger King" — through the Netflix docuseries.

The official music video accompanying the California rockers' rendition sees singer Dexter Holland and guitarist Kevin "Noodles" Wasserman abiding by social distancing regulations while sporting facial masks. They are accompanied on drums by someone wearing a tiger costume while a couple of "feline" friends keep things light for the band's fans.

Speaking of THE OFFSPRING's decision to cover the song, the group said: "Hey, Guys! Like many of you, we are going a little stir crazy these days and we wanted to do something fun to put a smile on our faces, and hopefully on some of yours too. This song, Here Kitty Kitty, was originally by THE CLINTON JOHNSON BAND, and *not* by anyone in that recent documentary we all got caught up in.

"THE OFFSPRING wives were group texting recently, and while they all agreed that they truly love their husbands, there are times when they’ve absolutely felt like feeding us to the tigers. In that spirit, we hope you enjoy this random song & video."

THE OFFSPRING recently completed work on its long-awaited tenth album. The follow-up to 2012's "Days Go By" was once again produced by Bob Rock, who also worked on the band's last two LPs.

We are going a little stir crazy these days & wanted to do something fun to put a smile on our faces & hopefully on some of yours too. Here Kitty Kitty was originally by the Clinton Johnson band & *not* by anyone in that recent doc we all got caught up in. https://t.co/c4Ps8YvhDzpic.twitter.com/ghVQMoTp1H