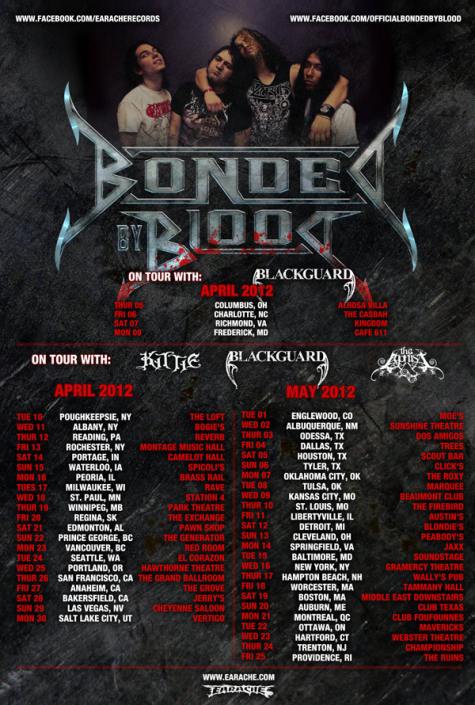 Commented BONDED BY BLOOD drummer Carlos Regalado: "It's been a crazy and totally cool month for us. We have finally finished up recording album #3! We love the sound we got and the way the songs came out — it's so aggressive and punchy. We poured everything we had into these songs (8 months!),and we can't wait for everybody to hear it! Mauro did such an amazing job and it's different from our previous records for sure, as is the music, but he really showed what he had and just totally blew us away. Our writing styles just keep evolving and we can't even believe we are capable of creating such power. The writing and recording was a blast, Logan is cool as shit and it's almost like he knew exactly what we wanted. We hope everybody enjoys this record as much as we do; we are gearing up for the road soon — see you in the pit!"

BONDED BY BLOOD is gearing up for a North American tour with KITTIE, BLACKGUARD and THE AGONIST which will kick off on April 10 in Poughkeepsie, New York.

BONDED BY BLOOD's second album, 2010's "Exiled To Earth", sold around 600 copies in the United States in its first week of release. The CD landed at position No. 86 on the Top New Artist Albums (Heatseekers) chart, which lists the best-selling albums by new and developing artists, defined as those who have never appeared in the Top 100 of The Billboard 200.