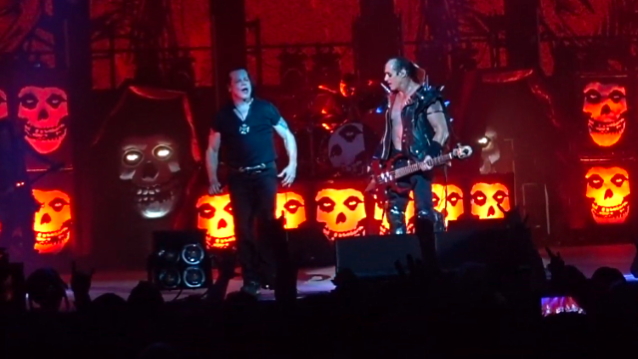 Abrams, the American publisher of art and illustrated books, children's books and stationery, has issued a statement in response to the lawsuit filed by the legendary punk rock band MISFITS over the advertising and sale of a photobook titled "Scream With Me - The Enduring Legacy Of The Misfits".

"Abrams intends to vigorously defend the lawsuit that has been filed on behalf of the MISFITS around the recent publication of the book 'Scream With Me'.

"As the plaintiff admits, the parties corresponded about this matter last July through their counsel. At that time, Abrams pointed out to the MISFITS' counsel that the book's publication was permissible under well-established trademark and copyright precedent. We are surprised to now see this baseless lawsuit nearly eight months later.

In the MISFITS complaint, Danzig and Only claim Abrams's photobook "is rife with large-scale, repeated, and unlicensed reproductions of Misfits A.D. intellectual property. For example, the cover of the photobook prominently displays, without authorization, the Misfits A.D. 'Fiend Skull design' trademark and, in doing so, misleads consumers into believing that the photo book has been approved by, or is associated with, Misfits A.D., which is indisputably false," the lawsuit reads. "The photobook also unabashedly copies wholesale copyrighted artwork associated with the MISFITS' musical recordings and releases. The MISFITS' copyrighted artwork is an integral part of the band's extensive and highly successful line of officially licensed merchandise and its world famous lifestyle brand. In addition, the named authors of the infringing photo book have been falsely affiliating themselves with the MISFITS in connection with advertising and promoting the publication and release of the book, further harming Misfits A.D."

Upon learning of Abrams' planned release of the book, Misfits A.D.'s counsel wrote to Abrams to demand that Abrams cease and desist from promoting, advertising or selling the book. In response, Abrams admitted that it obtained clearances from other copyright holders for the foreword, interviews, quotes, and certain photographs contained in the book, the lawsuit claims. Nonetheless, Abrams categorically denied that it needed clearance or authorization to use the Fiend Skull mark or to use and/or make derivative works of the MISFITS artwork in the book, according to the lawsuit.