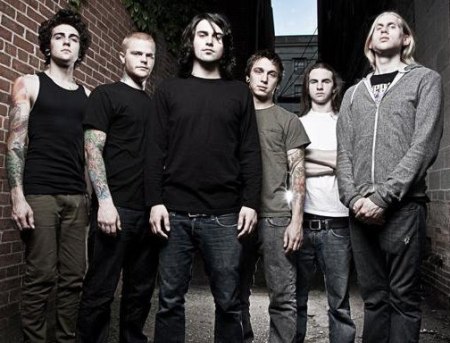 Chicago-based progressive metal hybrid BORN OF OSIRIS has been denied entry to Canada last night and will therefore be unable to join AUGUST BURNS RED on their previously announced Canadian dates.

Commented BORN OF OSIRIS guitarist Lee McKinney: "Due to some very unexpected problems at the border, we were unable to cross into Canada. We were forced to turn around and head home and could not be more bummed about this.

"We are so sorry to everyone who had already bought tickets to the shows in hopes to see us. We were excited to get to play a lot of places we haven't been to before throughout Canada with some great bands. We will try again to make it out to Canada in the near future, and will do everything within our powers to ensure we make it across next time."

"The Discovery", the third full-length album from BORN OF OSIRIS, sold around 6,400 copies in the United States in its first week of release to debut at position No. 87 on The Billboard 200 chart. The group's previous CD, 2009's "A Higher Place", entered the charts at No. 73 with first-week sales of over 6,000 copies.

"The Discovery" was released on March 22 via Sumerian Records. The CD was recorded at BOTA Studio in Lake In The Hills, Illinois and was mixed by Jason Suecof (ALL THAT REMAINS, TRIVIUM, DEVILDRIVER).