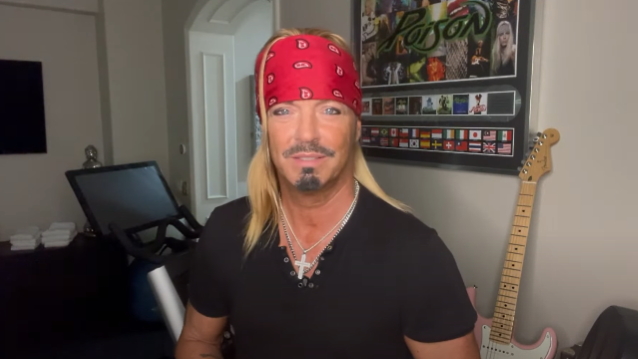 During an appearance earlier today (Monday, November 28) on SiriusXM's "Trunk Nation With Eddie Trunk", POISON singer Bret Michaels revealed that embark on his "Parti-Gras" solo tour next summer with support from NIGHT RANGER and JEFFERSON STARSHIP. The Live Nation-produced trek, which will kick off on July 13 in Detroit, Michigan, will consist of 12 dates in amphitheaters, including stops in Pittsburgh, Pennsylvania and at PNC Bank Arts Center in Holmdel, New Jersey.

According to Michaels, JEFFERSON STARSHIP will open the shows, followed by NIGHT RANGER, before Michaels and his solo band take the stage and perform Bret's biggest hits with a number of guests, including SUGAR RAY's Mark McGrath and former JOURNEY vocalist Steve Augeri.

"We have special mystery guests," Bret explained. "Every single night there'll be someone on that stage. I can't tell you exactly who it is, but if you've ever looked at everyone who's been on stage — I've had everyone from Jimmy Page to Jimmy Buffett to Paul Stanley — you don't know who it's gonna be, but we're gonna bring someone out and they're just gonna come out at the end of the night and we're gonna do their song.

"This is a true giveback," he added. "I don't want to say throwback, 'cause we're living in the here and now, but it's a throwback to a great time and a giveback to the fans. Everyone's gonna leave there going — hopefully they'll remember it, and if you remember it, it was awesome. So if you do remember it the next day after a good time, it's an amazing, amazing concert."

As for the possibility of extending the tour beyond just 12 shows, Bret said: "I would love to add more. So what happens is there's a lot of independent promoters in there that I wanna respect. It just won't be exactly this version. So in different cities, I custom created it for those cities and those shows and it's gonna be unbelievable. I've got some country artists on one. I've had some big country artists out with us that all of a sudden come out and we're doing one of their songs. They're doing 'Nothin But A Good Time' or 'Unbroken' or a solo song, but no matter what… Knowing me, you know what I mean. I wanna be the quintessential host. I want people to feel welcomed."

He continued: "There's a lot that goes on to make sure that those bands… When you're live, you've gotta make sure they have the right mic, they soundcheck, they feel good. But the one thing I said on this entire tour, I said, no egos, no attitudes — we work with every single person here. I wanna try to work together so it's an incredible show. I designed a stage so everyone has a huge amount of stage room. Every band can use all the sound, all the lights — everything we've got, they can have it. The only thing you can't oversupply is the cryo and the pyro, because the tanks run out."

Michaels also revealed that he will release a new solo single, "Back In The Day", in mid-January accompanied by a music video that he is directing and co-editing.

POISON's long-delayed North American trek with DEF LEPPARD, MÖTLEY CRÜE and JOAN JETT & THE BLACKHEARTS was originally planned for 2020 and later moved to 2021 and then to 2022. "The Stadium Tour" concluded on September 9 in Las Vegas, Nevada.