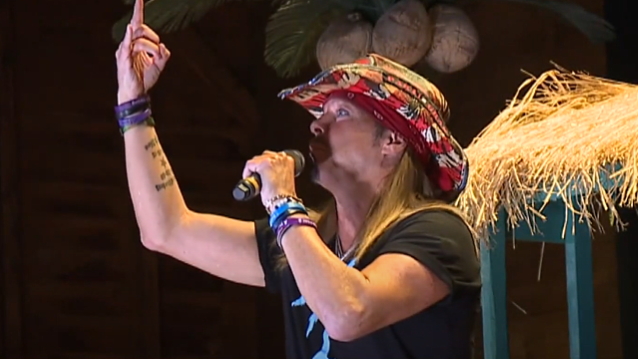 According to WGAL, Bret Michaels has been officially inducted into the Central Pennsylvania Music Hall Of Fame as a solo artist. He was previously inducted as a member of POISON in 2020.

The POISON singer received the plaque at an event in Hershey on Wednesday, November 30. Michaels and his POISON bandmates played at the Hershey Stadium in the summer of 2022 as part of "The Stadium Tour".

In his acceptance speech, Michaels said: "I accept this honor on behalf of all of us here. Listen, we are amazing. Central PA rocks. Hershey Stadium in the summer was incredible. It was amazing. That was a good day in my life a couple days after. It was amazing and I just want to tell you I am honored to be here today."

Bret's Hall Of Fame plaque reads: "Lead singer of POISON, solo artist, TV star, and philanthropist... Bret Michaels has several solo albums to his credit, including the soundtrack album to the movie 'A Letter From Death Row' in which Michaels starred, wrote, and directed in 1998. Michaels was a judge on the talent show 'Nashville Star' which led to his country-influenced rock album 'Freedom Of Sound' in 2005. He starred in the hit VH1 reality show 'Rock Of Love' and its sequels, which inspired his successful solo album 'Rock My World'. He was also the winning contestant on NBC's reality show 'Celebrity Apprentice 3' and also featured in his own reality docu-series 'Bret Michaels: Life As I Know It', which inspired his highest-charting album as a solo artist, 'Custom Built', reaching No. 1 on Billboard's Hard Rock list. In 2006, Hit Parader ranked Michaels in the Top 40 on their list of greatest heavy metal singers of all time. Outside of his musical accomplishments, Bret's charisma and caring heart put him on a pedestal as one of the most respected talents from our area. Despite Bret's band PARIS leaving Mechanicsburg, PA in 1984 to become POISON, Central Pennsylvania will always claim Bret Michaels as one of its own."

Brandon Valentine, president and founder of the Central Pennsylvania Music Hall Of Fame, said: "As a non-profit organization focused on music education for the local youth, the CPMHOF is honored to recognize Bret Michaels in a positive light. Bret has always held a special place in the hearts of Central Pennsylvanians."

Born in Butler and raised in Mechanicsburg, Michaels and his sisters Michele and Nicole were part of a family that were fixtures in the Central Pennsylvania community, with their father, a veteran, posted at the Mechanicsburg Naval Supply Depot and their mother at White Hill Correction Facilities. He has long spoken of his love for the state, the sports teams and its people — his fellow "yinzers."

"As the son of a veteran, my mother and father taught me the importance of hard work through a blue-collar Pennsylvania upbringing," Michaels said. "I was raised with an unbroken fighting spirit who never gives up in the pursuit of making dreams a reality. If you don't bet on yourself, nobody else will."

The Hall Of Fame sought to acknowledge Michaels for his extraordinary individual merits and achievements as a solo musician, singer/songwriter in addition to his outstanding accomplishments as a reality TV producer and star, and an entrepreneur who won "Celebrity Apprentice" and partnered with brands such as PetSmart, Overstock and The Dr. Pepper Snapple Group, to name a few. His achievements as a type 1 diabetic go far beyond just the music, though, as he helped to pass a state bill in the California Senate for education and affordable medicine for diabetics. He also has a career-long dedication to giving back through his Life Rocks Foundation, which saw him twice recognized as the Humanitarian Of The Year and also as a World College Radio Ambassador.

A big day in Hershey yesterday! Bret Michaels was formally inducted into the Central Pennsylvania Music Hall of Fame. He...

This morning, Bret was inducted into the CPMHOF,...