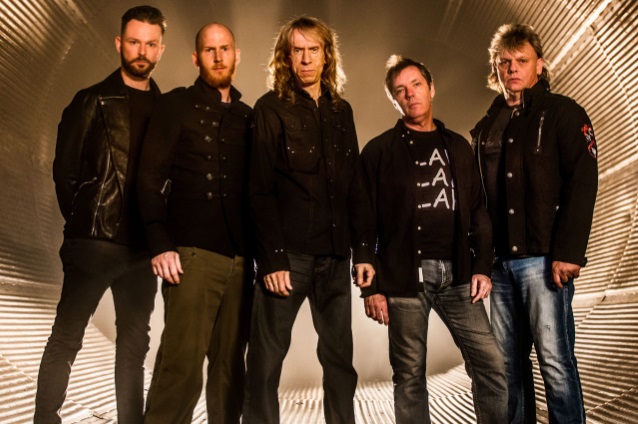 BRIAN TATLER On DIAMOND HEAD Being Called 'Next LED ZEPPELIN': 'It Might Have Been A Little Bit Of Wishful Thinking'

Mark Taylor of Metal Talk conducted an interview with guitarist Brian Tatler of NWOBHM (New Wave Of British Heavy Metal) legends DIAMOND HEAD prior to the band's December 6 concert at O2 Academy Islington in London, England. You can watch the entire chat below. A few excerpts follow (transcribed by BLABBERMOUTH.NET).

Brian: "I didn't really expect it to be as well-received as it has been. We just tried to make the best album we could, you always do and you hope people like it. There's no point in trying to second-guess what people might like. I think we just kind of had enough material, enough good material and we worked on it and got it as good as possible. Bringing in Ras [Rasmus Bom Andersen], the new singer, was a kind of breath of fresh air. A lot of new ideas."

On what Anderson brings to DIAMOND HEAD:

Brian: "New ideas and a bit of energy. He's younger than myself. I would say he's contributed to the revitalization [of DIAMOND HEAD]. But, he's definitely made a big difference. His vocal style just so suits the band, so it's just a match, a perfect match."

On the band being hailed as "the next LED ZEPPELIN" by the British rock press during their early years:

Brian: "I think it was youthful ambition. LED ZEPPELIN were my favorite band and a band to look up to. But it seemed like it stopped because they did stop in 1980 just when DIAMOND HEAD were coming through and we got signed in '82. It might have been a little bit of wishful thinking, a bit of aim high, naïveté. We probably alienated a few people who thought: 'You'll never touch the ZEPPELIN catalog,' which, is pretty mighty. I haven't seen a band come along, really, who has rivaled LED ZEPPELIN for me. We had some incredible press. A lot of top journalists like Geoff Barton [of Sounds and later Kerrang!] all came down and really believed in the band and thought we could go all the way. But that's another story. [Laughs]"

On "Am I Evil", a song found on DIAMOND HEAD's 1980 "Lightning To The Nations" album and later covered by METALLICA:

Brian: "That's hard to explain. It does seem like songs like that are very hard to write. I don't think I could do it again. It all starts quite simply with one guitar riff, usually I will come up with a riff or something and we would just build and build and build. The song grew into a seven-minute forty-second sort of epic. We wanted to write epic songs. We listened to bands like ZEPPELIN and RUSH. It was pretty much add-on. We'd have one bit and I remember coming up with the intro and the solo was a completely different bit. We just thought 'That bit would work nicely there and we could go back into that.' Over a good year, we built that song from the simple guitar riff. It takes a lot of time and a lot of…it's very brave to do a song like that. I realized that because it's not the normal. People stick to the beat, don't they? They put it down on Pro Tools and it's all on the grid."

On his thoughts when he first heard METALLICA's cover version of "Am I Evil", which is included as a b-side on the band's 1984 "Creeping Death" single:

Brian: "I was flattered. That was the main thing: nobody had covered DIAMOND HEAD before. To us, it still was Lars's [Ulrich] band. They were on Music For Nations [for the U.K.], they sent me the [single], 'Creeping Death'. We were just flattered. I was amazed that they worked out the solo and every little detail. It was great. It was like a fan or somebody's paying attention and making a good a job as possible. It was a bit heavier than ours, a bit tougher. It was great to hear. Who knew that they would be around for the next 30 years and conquer the world? They were small and had not been to England at that point."

On whether he remembers a 17-year-old Ulrich tagging along with DIAMOND HEAD:

Brian: "Yeah, of course. He stayed at my house for a bit. He slept on the floor, he slept in my brother's old sleeping bag and then he slept on the couch. Yeah, we took him to gigs, we took him to three gigs in the back of the car. We put an advert in Sounds, like a quarter-page ad for the album, the 'White Label' ['Lightning To The Nations'] album. He sent for his copy over in Los Angeles and wrote back to the address saying how much he liked it, etcetera. Then he must have arranged to come over when we were touring. He came to the Woolwich Odeon and found his way backstage and we took to him. We thought he was a very enthusiastic, über fan and he knew all about the New Wave Of British Heavy Metal and he was collecting records."

DIAMOND HEAD's latest, self-titled album was released in June 2016 via Dissonance Productions. The effort was the band's first to feature Andersen on vocals and its release ended an eight-year silence for the New Wave Of British Heavy Metal icons.

DIAMOND HEAD is putting the finishing touches on a new studio album for a mid-2018 release.