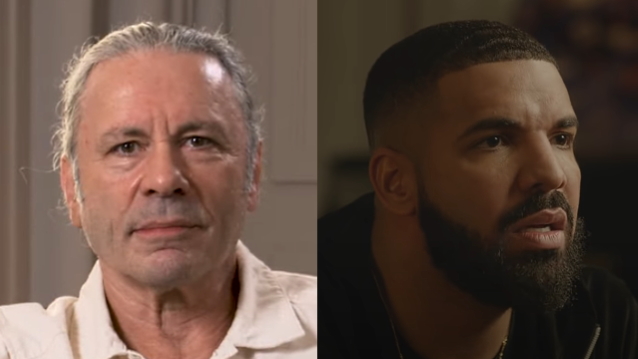 The 63-year-old singer made the comment less than four months after the heavy metal legends were narrowly beaten to the No. 1 spot on the U.K. album chart by the Grammy-winning rapper.

Even though IRON MAIDEN's well-received "Senjutsu" was ahead for much of the release week, Drake's digital-only "Certified Lover Boy" landed at the top of the chart on 45,651 chart sales (43,623 from streams). "Senjutsu" ended with a total of 44,473 (including 39,032 physical copies). "Senjutsu" also made No. 1 on the vinyl albums chart.

Dickinson said: "We went head to head with Drake the week the album was released. I don't really get what he does, though a lot of people do, but going head to head with him felt like, 'No this is real music played by a bunch of old geezers who make no concessions to the times in which we live.'

Bruce went on to say that he is pleased MAIDEN hasn't relied on social media to grow its fanbase.

"By and large our audience as moved on with us," he said. MAIDEN's audience is like a table made of plywood; every year you just add a new layer and the table gets bigger and bigger. We've grown organically — not through social media or any of that stuff. We've grown by going out and doing it in front of people."

"Senjutsu", IRON MAIDEN's first album in six years, was recorded in 2019 in Paris with longstanding producer Kevin Shirley and co-produced by Harris.

According to Billboard, "Senjutsu" logged the second-largest week of 2021 for a hard rock album in both equivalent album units earned and in traditional album sales. It trailed only FOO FIGHTERS' "Medicine At Midnight", which debuted on the Feb. 20 chart with 70,000 units (of which 64,000 were in album sales).