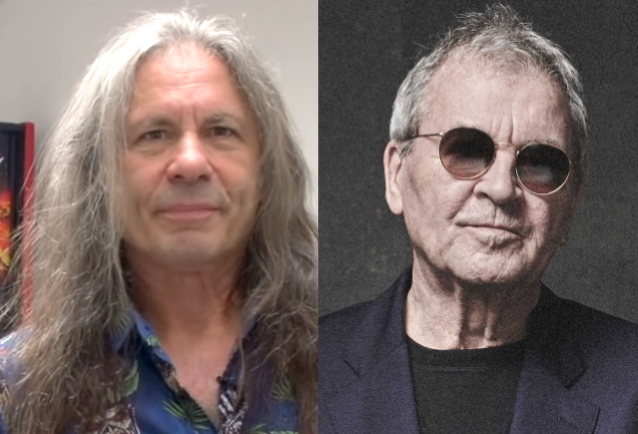 IRON MAIDEN singer Bruce Dickinson was the featured guest on BBC's "The Rock Show With Johnnie Walker" during the "Rock God" segment. Bruce picked DEEP PURPLE frontman Ian Gillan and stated about his choice: "So there I was as a young spotty teenager — just a teenager, I should hasten to add — and there was this noise coming through somebody's door. And I opened it, and I [went], 'What on earth is that?' And it was 'Speed King' by DEEP PURPLE off 'Deep Purple In Rock'. And that was what got me started.

"Having said all that, I met Ian Gillan. Not only did I meet him, I actually went on tour with him when I was in a band called SAMSON.

"I'm in a studio. We've done an album in Ian Gillan's studio. We've all been at the pub and had a few pints. In walks my god Ian Gillan and goes, 'Hey, what a great vocalist. Who's the singer?' At that moment, I felt the sudden urge to vomit. I ran out of the room, puked up for about 45 minutes in the toilet when in comes my idol, kicks the door and goes, 'C'mon, mate. Out you come. Let's get you wiped down with a towel.' He put me in a taxi and sent me home. I've never forgotten that, and he's never let me forget it either."

Several years ago, Dickinson told Metal Hammer that Gillan was a big influence on him vocally. "Ian was a big vocal hero of mine," he said. "There was Ian Gillan, Arthur Brown, Ian Anderson from JETHRO TULL, surprisingly enough, and a chap called Peter Hammill from VAN DER GRAAF GENERATOR. They're all in the same area of voices — they all had a ballsy sort of tenor, extended baritone thing to their voices."

Dickinson previously said that "Fireball" was one of his favorite DEEP PURPLE cuts. He stated about the song: "It's just one of those tracks that is not played very often, but it's got some phenomenal bits in it. And, of course, it's also got — I mean, having been a drummer or at least aspired to being a drummer, I have huge respect for drummers, and Ian Paice is simply one of the finest drummers in the world; he really is. And I suppose if you're going to be a drumming nit-noid type guy, it's his foot, it's all down to his foot."