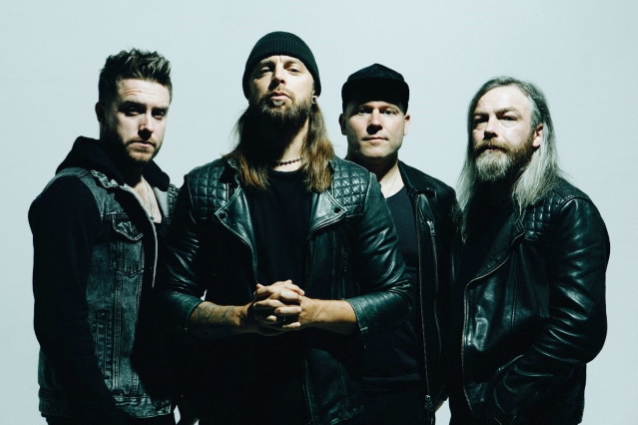 BULLET FOR MY VALENTINE Guitarist On New, Self-Titled Album: 'We Started Writing Heavy Right From The Start'

Welsh metallers BULLET FOR MY VALENTINE will release their new, self-titled studio album on November 5. The follow-up to 2018's "Gravity" was previously described by frontman Matt Tuck as "brutal, heavy and technical" as well as "more visceral and passionate than it's ever been."

Asked in a new interview with A&P Reacts if it was a conscious decision to make a more aggressive album than before, BULLET FOR MY VALENTINE guitarist Michael "Padge" Paget said (as transcribed by BLABBERMOUTH.NET): "We started writing heavy right from the start, and it just got heavier and heavier. Once we realized we were gonna make an aggressive record, there was no stopping us. We had a direction, we knew what sort of road it was gonna go down, and we just kept writing and making it as heavy as we possibly could.

"I think without 'Gravity', this record might not have happened. So the last record definitely gave us a direction to go in on the new one. So it's been interesting. But [they're] two completely different albums. It's just awesome how it's turned out. We're super stoked."

Paget also talked about BULLET FOR MY VALENTINE's penchant for combining ultra-heavy music with catchy hooks and melodies, something that is still present on "Bullet For My Valentine".

"I think it's just the formula that BULLET's always had," he said. "We definitely have the riff, then the verse and then the heavy chorus, with the catchy chorus, hook and whatnot. It's just a formula that we've always had as BULLET. And I think if we started with not using our formula, it would be something completely different. So I think using the BULLET formula just keeps us to our roots. And that's just the way we write, man, and that's just how it sounds. So I think every album has got that element."

"Gravity" saw the metal juggernauts' catalog surpass one billion streams in the U.S. That accomplishment solidifies BULLET's hard-earned status as one of the most elite bands in the hard rock scene.

On the last cycle, BULLET FOR MY VALENTINE played its biggest shows to date, including a U.K. arena tour and a massive show at London's Alexandra Palace.