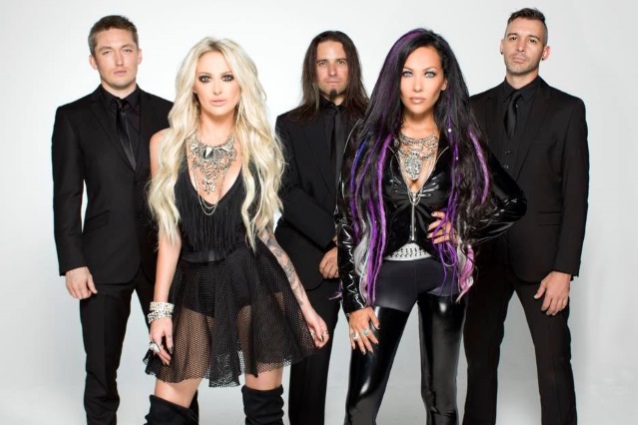 Metal Wani's Fernando Bonenfant conducted an interview with BUTCHER BABIES frontwomen Heidi Shepherd and Carla Harvey before the band's March 4 concert at at Dome in London, England. You can now watch the chat below.

Asked how they deal with the so-called "keyboard warriors" who type things on the Internet they would never say to the bandmembers' faces, Carla said: "I think it takes more courage just to ignore it. We've always gotten that our whole lives, not just from Internet keyboard warriors, but back in school — in high school or middle school or college; whatever — we're used to being criticized or negative energy."

Added Heidi: "Sometimes we'll call out people here and there. I mean, it's relentless. Several times a day, someone will just tweet me and say, 'Fuck you.' [And I'm like,] 'Okay.' What's the point? But sometimes, every once in a while, I'll respond to it, because if the same person continues and continues and continues, I'll just put 'em on blast, 'cause it's, like, 'You're making yourself dumb for the things that you're saying. You're not making me look dumb, because I can do that myself.' [Laughs] To us, it's an everyday thing, and so we don't really let it bother us. It's not something that we're bothered by."

Continued Carla: "If you let what people say online bother you every day of your life, you'll lead a miserable existence. My personal life is clear of all the Internet drama. Who cares? And, obviously, it's been nine years since we started the band. We're a lot different now than we were nine years ago. But we've had to just let it go and not care."

BUTCHER BABIES are continuing to tour in support of their third album, "Lilith", which was released last October via Century Media. The follow-up to 2015's "Take It Like A Man" was produced by Steve Evetts (THE DILLINGER ESCAPE PLAN, SEPULTURA, SUICIDE SILENCE) and marks the band's recording debut with new drummer, Chase Brickenden, who replaced Chris Warner in 2016.