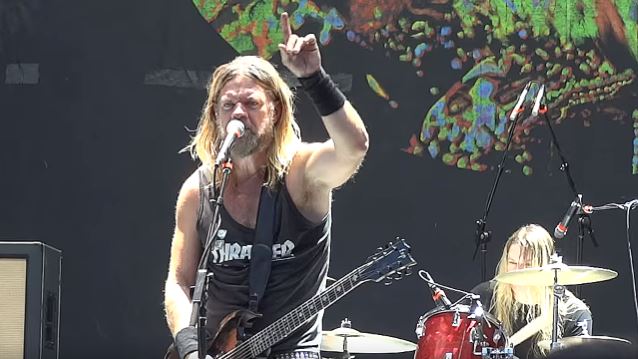 C.O.C.'s PEPPER KEENAN On Security Concerns In Wake Of Paris Attacks: 'I Think About It Every Night'

In a brand new interview with Vanyaland, CORROSION OF CONFORMITY frontman and DOWN guitarist Pepper Keenan was asked if the recent massacre at an EAGLES OF DEATH METAL concert in Paris and the onstage murder of PANTERA guitarist "Dimebag" Darrell Abbott more than ten years ago has made him more concerned about his own personal safety while performing with any of his bands.

"I think about it every night," he admitted. "From Dimebag's death on. I mean, [at the concert CORRROSION OF CONFORMITY played] last night, the lights were blinding; I couldn't see two feet in front of my face. So I've been thinking about it long before the Paris thing, but you just kind of hope that it's not your thing."

He continued: "When it comes to the Paris show, DOWN played that venue a couple years ago, sold it out like [EAGLES OF DEATH METAL] had. And I remember how packed it was in there; it was probably one of the hottest shows DOWN ever played. But I also remember there wasn't any way to get out of that place except the front door. The second I heard Bataclan, I was, like, 'Man, those people were fucked.' But it's terrible."

Pepper added: "EAGLES OF DEATH METAL are really good friends of mine and it's a fuckin' tragedy. Especially guys like that; it ain't like SLAYER or something. Not that it makes any difference, but the world that those guys are in… they got nothin' to do with any of that shit, nor do their fans. The whole thing was just ridiculous.

"And with EAGLES OF DEATH METAL, they've got great songs, but the fact is they're almost a tongue-in-cheek band. People are going there to have fun. So for that to happen there, it just blew my mind.

"Hopefully they can find some degree of healing, and spread some love and healing. That's the route I would take."

Asked if the events in Paris put him back to a headspace like when Dimebag was killed where everybody was on edge, Pepper said: "Obviously, it's kind of got everybody fucking insane. Just walking down the street now. And for me, I'm probably a little dumber than the average person when it comes to that, but I've gotta live my life, and I hope that I would be prepared in a situation if it arises, or when it arises, and act accordingly."