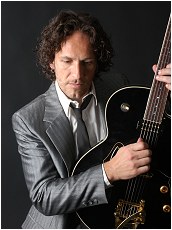 Rush On Rock recently conducted an interview with guitarist Vivian Campbell (DEF LEPPARD, WHITESNAKE, DIO, THIN LIZZY). A couple of excerpts from the chat follow below.

Rush On Rock: What was the first thought that went through your head when you were approached to join THIN LIZZY?

Vivian: I remember thinking what an exciting opportunity this was for me. As a guitarist, their music has always been such a huge part of my life. I'm entirely self-taught and taught myself a lot of LIZZY songs. Marc Bolan was my first point of reference as a rock guitarist and then I discovered Rory Gallagher. From there I found LIZZY. It's very exciting to be in this position. It's reconnected me to the electric guitar. I've been in DEF LEPPARD for 20 years, and if I'm honest, it's not a terribly challenging job for me as a guitar player. Phil Collen plays most of the widdly guitar parts and I do what I do. But this job has reignited my love for guitar playing.

Rush On Rock: Do you think the time was right for a LEPPARD hiatus regardless of your own misgivings?

Vivian: I do think it was the right time to have a break. For Joe [Elliott, vocals] in particular it was important. He was burnt out. We'd been touring for five years without a break and it was starting to take its toll. As for the rest of the guys I'm not sure. I don't honestly know what Sav's [bassist Rick Savage] been doing. Rick Allen's [drums] been pretty busy and Phil's been busy with his own band. I just think Joe wanted a complete break from DEF LEPPARD rather than a break from everything. As it turns out he's been working harder than ever with the LIZZY stuff and the DOWN 'N OUTZ.

Rush On Rock: So what does the immediate future hold for LEPPARD?

Vivian: We've got a couple of new songs on the go. We have a live record coming out in 2011 and we're looking at attaching two, three or four new songs to that album when it comes out. There are also plans for a career-encompassing box set. It will happen but we need to sort a few things out contractually. As it happens, we're talking to our old label, Universal, about re-signing with them. That would make things a lot easier. LEPPARD will be back this summer and we'll be touring North America and Canada.

Rush On Rock: If the chance to join LIZZY was a highlight of 2010 then was the passing of your former band mate Ronnie James Dio a low point?

Vivian: You know, I was numb to the whole thing. I hadn't talked to Ronnie in 25 years, so it wasn't as if we were close. My mother died nine or 10 days before him, so I was preoccupied with that. And my father died nine months before that. It was a really tough year on a personal level and I had enough to think about. The news about Ronnie James Dio just bounced off me. It was a difficult relationship on a personal level anyway. I was really proud of the music we made together but it was tough being in a band together. But he died way too young.

Read the entire interview from Rush On Rock.