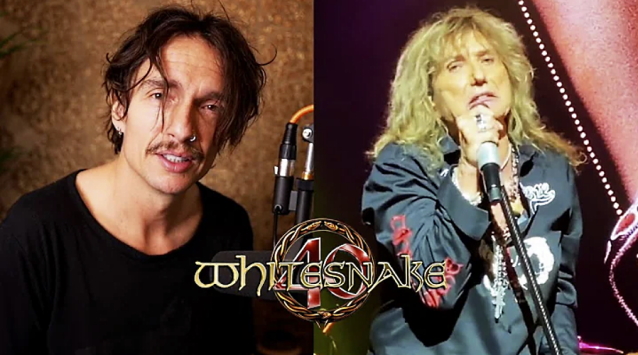 THE DARKNESS singer Justin Hawkins has weighed in on David Coverdale's vocal performances during WHITESNAKE's current European tour which kicked off May 10 at the 3Arena in Dublin, Ireland. The trek is being billed as WHITESNAKE's farewell tour, with Coverdale, who turned 70 last September, saying that touring has become "a very physically challenging thing for me to do at the best of times."

Hawkins, a 47-year-old British-born rocker who currently lives in Switzerland, offered his assessment of David's singing ability via his YouTube series "Justin Hawkins Rides Again" where he shares a mixture of serious musician analysis and fun hot takes to his 133,000 subscribers.

After watching a fan-filmed video of WHITESNAKE performing in London earlier this month, Hawkins said in part (as transcribed by BLABBERMOUTH.NET): "[David's] lost a bit of power [in his voice]. It is the farewell tour, and I think this is most probably why."

As for whether he would recommend to someone to go see WHITESNAKE perform on the current tour, Justin said: "I think it's just a question of what you want from a gig. If you wanna go to a celebration of an amazing era of music with some guys that actually helped to define what that genre actually means… I'd go — I mean, I'd fucking go. It doesn't matter to me, 'cause I will be sitting there… I'll be singing all those songs front row, hands in the air, having a great time. And it's a farewell tour, so by its nature it's nostalgic. But I think if you're expecting to see David Coverdale in his pomp giving a vocal masterclass, it probably isn't gonna be the right gig for you. But I personally would go, and I'd probably have a great night out as well. I think that's what it's all about, isn't it? A great night out."

He continued: "After the times we've had in the last couple of years… Ideally, even two years ago, David Coverdale probably would have been a better singer. Who knows how COVID affects us? We just sat in our houses doing fuck all, and then you're suddenly expected to… the machine to crank into action and everything to be as it was. It doesn't work like that. But as I said, I'll see you down the front. Next time WHITESNAKE are playing anywhere near me, I'm down there rocking, and I hope you are too."

Last October, Coverdale told the "Appetite For Distortion" podcast that he originally planned to retire on WHITESNAKE's 2020 tour when he was 69 years old. "I thought that was the perfect age for the singer of WHITESNAKE to call it a day," he said. "But sadly, it was not to be, as we know; other events were in store. So now the t-shirt designs don't resonate as well for 70. But it's mind-blowing to me that I'm preparing my farewell tour. And it is — make no mistake, this is the farewell tour. I'm 70. It's a very physically challenging thing for me to do at the best of times. But it's very important for me to achieve completion and to express my appreciation and gratitude to all the people — the millions of people over the years — who've supported me for five decades, fifty years. It blows my mind — it really does."

"I've got a bunch of ideas for WHITESNAKE, so we may have another project there — I don't know — without the pressure of having to go on tour," he said. "We have such a solid fanbase, I think fans are gonna buy the record with or without a tour. This is just emotionally for me to be able to go out there and do stuff. And also, you've gotta remember, we've started this legacy series of box sets, similar to the 25th anniversary. And then in 2023, we have the 30th anniversary of COVERDALE/PAGE, and the 50th anniversary of me joining DEEP PURPLE. Mind-blowing. So it's not like I'm retiring. [Laughs]

In September 2020, Coverdale underwent surgery for bilateral inguinal hernia at the Renown facility in his hometown of Reno, Nevada. Three years earlier, he had both his knees replaced with titanium after suffering from degenerative arthritis. He later explained that he was in so much pain with arthritis in his knees that it hampered his ability to perform live.