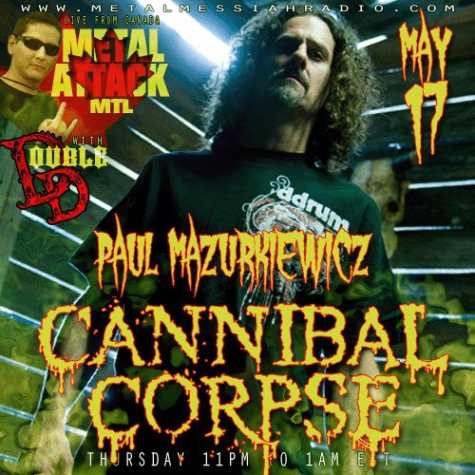 On May 16, Montreal, Quebec, Canada metal radio show "Metal Attack MTL", which airs on MetalMessiahRadio.com, conducted an interview with drummer Paul Mazurkiewicz of Florida death metallers CANNIBAL CORPSE when Paul was in Montreal to serve as a special guest judge for Round 5 of Heavy MTL's "Battle Of The Bands". You can now watch the chat in two parts below.

CANNIBAL CORPSE's twelfth studio album, "Torture", sold 9,600 copies in the United States in its first week of release to debut at position No. 38 on The Billboard 200 chart. The band's previous CD, "Evisceration Plague", also opened with 9,600 units to land at No. 66. That was more than 50 percent higher than the opening tally of CANNIBAL CORPSE's 2006 CD, "Kill", which entered the chart at No. 170 after shifting more than 6,000 copies.

"Torture" was again produced by HATE ETERNAL's Erik Rutan at his own Mana Recording Studio in St. Petersburg, Florida as well as Sonic Ranch in Tornillo, Texas, and features the maniacal cover art by longtime CANNIBAL CORPSE artist Vincent Locke.

While "Torture" marks the latest progression in the band's sound, it also witnesses a return to what drummer Paul Mazurkiewicz accurately terms "the frenzied attack of 'Butchered At Birth' (1991) or 'Tomb Of The Mutilated' (1992)," infusing the band's advanced musicianship with the raw savagery that haunted their earlier releases, and in the process conceiving the definitive CANNIBAL CORPSE record.