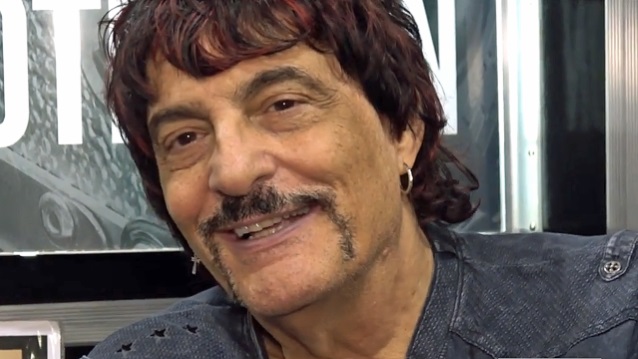 CARMINE APPICE On Scrapped BLUE MURDER Reunion Plans: 'We Still Can't Get JOHN SYKES Out Of The House'

Carmine: "He's just a great, great singer. He's a good friend of mine. I call him my brother from another mother. We're so close, and any time I need vocals and lyrics, I call him because he's awesome. We did two KING KOBRA records together. 'Monsters And Heroes' actually started in 2011. It was written by me, Paul and Dave [Michael-Philips] from KING KOBRA. We recorded it with KING KOBRA and gave it to Wendy Dio to use for her foundation, the cancer foundation. They used it for two years, and anything that the record made money-wise went into the foundation. Then the rights came back to me. When we got this record deal, I said to [my brother] Vinny, 'You should listen to the song. I think it would be a great song for me and you to do for the album.' He loved the song, so we took that song and gave it to SPV as a demo, and they loved it and they signed us. When we did the record, we took the multi-track of that song, did some editing and fixing up and put Vinny on it, so actually Vinny and KING KOBRA are playing on that song. Then we released it, and we said, 'We were going to do the album dedicated to Ronnie.' Paul used to be managed by Wendy and Ronnie; Vinny played with him; he was like family to us; and I've known him since '78. I said, 'This is a natural.' The video, we got permission to use Ronnie's pictures in the video, and it's a real great tribute to Ronnie, who's a great singer and a great guy."

On his favorite act he ever performed with:

Carmine: "The stint with Rod Stewart had to be the most unbelievable time. You go in the studio; you record a record; you know you're going to sell five million records; you go out and you play, like, six nights at The Forum, which is 20,000 a night; then you go to Australia and play with 40,000 people in a stadium plus six nights at an 8,000-seater. It's, like, 100,000 people, almost. Then I co-wrote 'Do Ya Think I'm Sexy', and it went to No. 1 and sold so much, and I made so much money and [it] brought me into a whole new status of my career. Learning a lot about songwriting from Rod, a lot about image. If you go out and do a drum clinic, don't just do a drum clinic. Make it an event. Giving money to charities. I learned so much from that whole experience with Rod that carried through to the rest of my career."

On the scariest moment he's experienced on the road:

Carmine: "I have been prone to these massive bloody noses. I had surgery ten years ago, and I just had another surgery, and they found something that was not correct in my body. There was a vein attached to an artery that went right to my nose, that shouldn't have been there. They said, 'If you have a nosebleed, it's like a faucet.' Right after the ['Monsters And Heroes'] video, I came back to New York and I ended up in the hospital for three days. Not supposed to happen according to the last surgery, but this one was more precise. Anyway, it's when I had some bloody noses on the road where it wouldn't stop. One time, I was in Australia and I was getting ready to go on and do a big clinic — there was, like, 800 people out there — and I was wearing a Sabian white gym suit, and I got a bloody nose and I bled all over the white. [Laughs] It wasn't good."

On whether he hopes VANILLA FUDGE will ever be nominated for the Rock And Roll Hall Of Fame:

Carmine: "I don't know. I gave up on that. I think if we were going to be in, we would have been in already. I'm very disappointed at it, because they should call it the 'Music Hall Of Fame', because they're bringing in people that are not rock n' roll. We influenced a lot of the people that they brought in already. Between VANILLA FUDGE and CACTUS, we influenced so many people back in the day. VANILLA FUDGE should have been brought in. I mean, DEEP PURPLE's brought in, right? We influenced DEEP PURPLE. We influenced LED ZEPPELIN. We influenced so many bands, but I don't really think we're ever going to get in. I don't really care. We're in the Long Island Hall Of Fame; I'm in the Modern Drummer Hall Of Fame; I'm getting a Heavy Metal Hall Of [History] award at the NAMM show; I'm on the RockWalk on Sunset Boulevard; so I think I personally left my mark, and VANILLA FUDGE left their mark too. 50 years, and we're still playing.."

On whether BLUE MURDER will ever reunite:

Carmine: "I doubt it. Me and Tony [Franklin, bass], last year we played with John [Sykes] at his house a couple of times and we thought we were gonna go out, and then it never happened. As Mike Portnoy asked me when he was trying to put THE WINERY DOGS concept together with John, he said, 'How do you get Sykes out of the house?' I said, 'Dude, I tried for 10 years, 12 years, I'm done.' Then I went back again and we tried again, and we still can't get him out of the house. The closest we got is 'Riot' on the 'Sinister' album, with Robin McAuley singing and GOV'T MULE's bass player, Jorgen Carlson, playing bass, and it sounds pretty damn good on that record."

"Sinister" — the first-ever joint studio record featuring both Carmine and Vinny — was released on October 27 through SPV/Steamhammer.