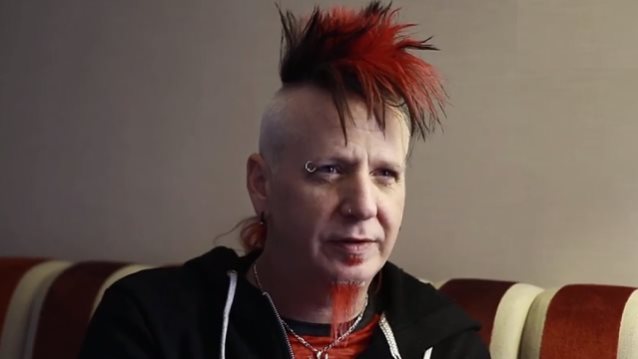 CHAD GRAY Doesn't Know If MUDVAYNE Will Ever Work Together Again

In a brand new interview with Greg Prato of Songfacts, HELLYEAH and MUDVAYNE singer Chad Gray was asked if he thinks MUDVAYNE will ever work together again.

"I don't know if the full band will," he responded. "Who knows — they might be putting something else together. We were talking for a while and that whole Greg thing went down [MUDVAYNE guitarist Greg Tribbett left HELLYEAH in 2013] and everything kind of fell apart. Our relationship, which was the only truly solid relationship in the whole group, although Matt [McDonough, drums] and I are still great, Ryan [Martinie, bass] and I still briefly talk. I mean, the only way I personally would want to do MUDVAYNE is if everybody licked their wounds and got over it."

He continued: "There's a lot of things in that band that tore us apart. Maybe MUDVAYNE was the martyr for people that stopped supporting music. You sell 159,000 records the first week, and then the next record is like, 'Whatever, fuck it.' Maybe it's a subliminal message if you don't support things… MUDVAYNE's probably bigger now than it ever was. So, people want what they can't have."

Asked in Revolver magazine if Greg's exit from HELLYEAH hit him especially hard, seeing as the two of them started off paying together in MUDVAYNE, Chad said: "Yeah, man. He has always been my right-hand man. He's been the back I look at when I'm writing songs and the sounding board for my ideas. When everything went sideways, it was like losing a great friend. I was filled with fear and I had mixed emotions. At first, I was like, Goddamn, I don't know if I'm ever gonna be able to do this without him."

Questioned directly if MUDVAYNE is officially over, Chad replied: "I don't think so. We all still talk. I'm not ready to put a headstone on anything yet."

Back in March 2014, MUDVAYNE posted a message on its Facebook page denying that the band had broken up. The group wrote at the time: "Final explanation… MUDVAYNE is on hiatus. With respect to all the bandmembers, we are all doing something in music that satisfies our appetite right now. When the time is right, MUDVAYNE WILL be back in action. In no shape or form is this a disrespect to our fans. We love our fans and will give them all they can handle when it is time. 'Till then, patience is needed."

It's been more than five years since MUDVAYNE released its self-titled fifth album and little has been heard about the band since then. But in a late 2010 interview with the music blog Warwick, MUDVAYNE bassist Ryan Martinie discussed the group almost entirely in the past tense. When asked about the quartet's musical evolution, Martinie said, "I think that what we did is valuable. It's become a cog in the wheel of music in some sort of way. We are a piece of musical history now . . . We were always just responding to our environment. I always saw the band to be important as an aspect of my life, as something that was supposed to take us places that are positive, and in that sense everything that happened with the band has happened for a reason."