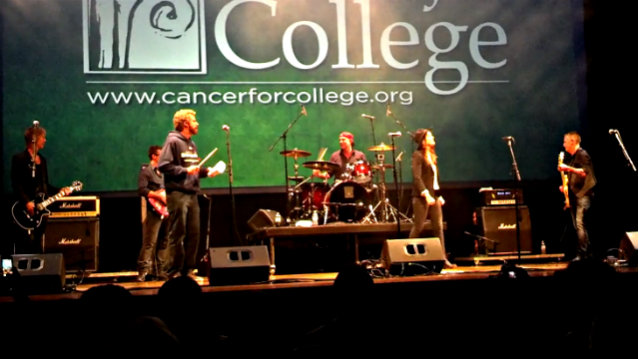 PEARL JAM's Mike McCready, former GUNS N' ROSES bassist Duff McKagan and RED HOT CHILI PEPPERS/CHICKENFOOT drummer Chad Smith performed a cover version of THE ROLLING STONES classic "Honky Tonk Women" as part of a makeshift all-star band that was dubbed I PISSED MY PANTS last night (Friday, September 19) at the Cancer For College charity event in Seattle, Washington. Hosting the event was Chad's lookalike, actor Will Ferrell, who joined in on the performance on cowbell. Handling the lead vocals was Brandi Carlile.

Chad and Will staged a drum battle back in May, showing up on "The Tonight Show" in matching black leather jackets, KISS T-shirts, sneakers and blue baseball caps worn backwards.

They sat down with host Jimmy Fallon to discuss the history of their "feud" — with each speaking as the other person.

The pair then launched a "traditional drum-off," with the intensity and complexity of the solos increasing with each successive round. Ferrell was assisted by Fallon's band leader and "ghost drummer" Questlove of THE ROOTS.

Smith has claimed that he's been mistaken for Ferrell for years, with Ferrell acknowledging the resemblance in a recent Reddit AMA session. The two escalated their "feud" into the drum-off challenge.