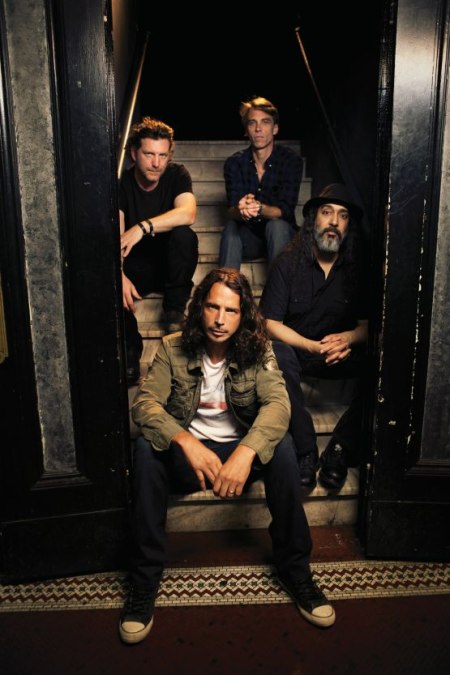 CHRIS CORNELL On New SOUNDGARDEN: 'It's Just Moving Ahead And Picking Up Where We Left Off'

Cory Graves of the Dallas Observer recently conducted an interview with SOUNDGARDEN/ex-AUDIOSLAVE singer Chris Cornell. A couple of excerpts from the chat follow below.

Dallas Observer: One of your most recent tweets mentioned the fact that you and the other SOUNDGARDEN members have been jamming on a new album. What have these sessions been sounding like, or what might you compare the new sounds to?

Cornell: It's different than other music that we've done, and that makes it a lot like our other albums in that we were always trying to forge ahead. We never have been a band that's been that comfortable pinpointing one aspect of what we do as being "our style" and then steering into it. We've kind of always done the opposite, and, potentially, we're still doing that. We've got a lot of different musical feels. It's similar [to our previous material] because it's the four of us — it's who we are and what we sound like — but I can't even think of one song that I would say reminds me directly of another SOUNDGARDEN song. So, in that way, it's SOUNDGARDEN as I know it. It's just moving ahead and picking up where we left off.

Dallas Observer: Are you finding that playing together now is more enjoyable than it was 12 years ago?

Cornell: In some ways I think, yeah. There's less stress involved in terms of it feeling light. We're on this never-ending cycle of writing and recording albums, and tours to support it. The [album] cycle really starts with writing and then recording, and then mixing and mastering, and while the writing and recording process is happening, tours are being set up surrounding the release of it, which means that then there's a release date, which means you've penciled in the date it's going to be finished and you're not even done writing it yet. A lot of music gets created that way, but, as a band just starting out, we were just writing music. We didn't have anywhere to release it — which is kind of the opposite problem. Now it's just more [reminiscent of how it was during the] early period, where it's about songwriting and we have no release date and no projected season that the CD is going to come out in. So as we're writing and recording, it's simply focusing on the music and the recordings. There's no stress about "These have to be a certain way!" and "[They] have to mean a certain thing!" [and be finished] by Thursday.

Dallas Observer: Do you think this solo acoustic tour — and to a lesser extent the new SOUNDGARDEN material — will help to win back the favor of fans who maybe didn't like your Timbaland-produced, electro-pop album, "Scream", as much as they did your earlier material?

Cornell: I don't really care. I've never really done anything with any concern about "favor," and I actually think that there's a lot people who see me when I do solo shows that love that record. I have fan requests for songs from that record for this tour all over web sites. Again, of course, I don't really pay much attention to [the Internet], so I don't know if I'll play songs from it. If anything, [playing solo acoustic shows] unites all my different records and all my different periods as a solo artist and a member of bands because you have to interpret everything through acoustic guitar and singing. It puts every single song in a similar arena.