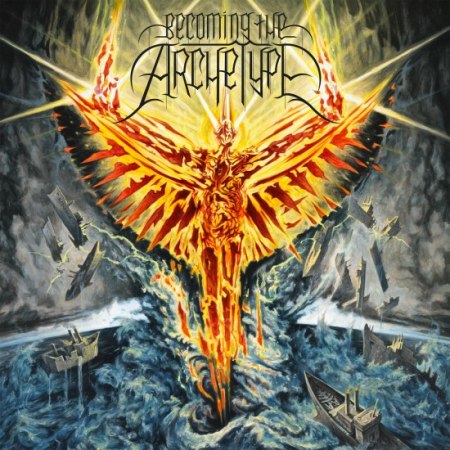 "The Magnetic Sky", the new video from Atlanta, Georgia-based metallers BECOMING THE ARCHETYPE, can be viewed below. The clip is described in a press release as "an 8-bit fantasy adventure that finds the members of BECOMING THE ARCHETYPE wandering through a sci-fi landscape in the format of an old Nintendo game, fighting their way through a wasteland of terrifying creatures to fulfill an arcane mission." The track comes off the band's fourth album, "Celestial Completion", which was released on March 29 via Solid State Records. The CD was produced by Matt Goldman (UNDEROATH, THE CHARIOT, COPELAND) and contains 11 tracks.

Commented BECOMING THE ARCHETYPE guitarist/keyboardist/vocalist "Count" Seth Hecox: "'The Magnetic Sky' is good introduction to the wild metal adventure of 'Celestial Completion' — it's not exactly what you would call standard metal, but neither does it become as completely unhinged as other album tracks.

"'Magnetic Sky' features a healthy dose of Jason's [Wisdom, vocalist/bassist] vocal range and style, as well as clean vocals by Daniel [Gailey, guitarist] and me. It's got a lot of the elements that this record has, but doesn't go off the deep end in terms of experimentation. That makes it a good first impression for both longtime fans and recent fans."

Giving a glimpse into an unorthodox writing process that yields unorthodox results, Seth continues: "Jason would walk around singing 'riffs' into his phone to remember them. Then he would go to Daniel and say, 'I got this idea for a riff that goes 'bing, bing, bicki bing, bicki bing, bicki bing bing' and poor Daniel would have to figure out how to translate the sounds Jason made with his mouth come out of his guitar."

"Celestial Completion" is a wildly ferocious, relentlessly creative and breathtakingly risky album that will redefine BECOMING THE ARCHETYPE for fans, skeptics and critics alike. Like the bandmembers themselves, the album is uncompromisingly metal, yet unafraid to show a sense of playfulness as it pushes the limits of heavy music to the very breaking point. There are horns. There is Middle Eastern sitar. There is a choir of sopranos. Needless to say, paint-by-numbers metal this is not. But one bone-crushingly heavy, imaginative tour de force it certainly is.

Speaking of the band's sense of musical adventure, guitarist/keyboardist/vocalist "Count" Seth Hecox says, "Everyone should know that we have championed a great juxtaposition between heavy music and world music on 'Celestial Completion'. Complete with BECOMING THE ARCHETYPE-patent keyboards, epic riffs and Jason Wisdom's incredible lead vocals, all the elements of great music are firing on all cylinders."