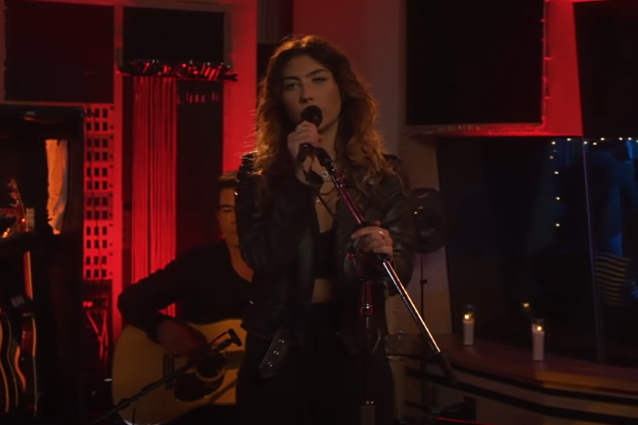 Chris Cornell's daughter Toni Cornell performed her late father's Grammy-nominated cover of Prince's "Nothing Compares 2 U" on last night's (Thursday, December 16) episode of "The Tonight Show Starring Jimmy Fallon". The 17-year-old singer was joined on acoustic guitar by Pete Thorn, who had performed with Chris Cornell on tours supporting the SOUNDGARDEN frontman's "Carry On" and "Scream" solo albums.

Last month, Chris Cornell was nominated for two Grammy Awards: "Best Rock Album" for his covers collection "No One Sings Like You Anymore Vol. 1", and "Best Rock Performance" for his version of "Nothing Compares 2 U".

"No One Sings Like You Anymore", Chris Cornell's handpicked collection of 10 cover songs, which he personally selected and sequenced to celebrate artists and songs that inspired him, was released in December 2020. Recorded by Chris in 2016, the album, which is his last fully completed studio LP, also features his renditions of John Lennon's "Watching The Wheels", GHOSTLAND OBSERVATORY's "Sad Sad City", Harry Nilsson's "Jump Into The Fire", Carl Hall's "You Don't Know Nothing About Love", ELECTRIC LIGHT ORCHESTRA's "Showdown", Terry Reid's "To Be Treated Rite", Lorraine Ellison's "Stay With Me Baby" (originally released for HBO's show "Vinyl"),and "Get It While You Can", popularized by Janis Joplin. Chris's cover of GUNS N' ROSES' "Patience", which was released on his birthday this year, and earned him his first solo Billboard No. 1 on the Mainstream Rock Songs chart, is also included on the album.