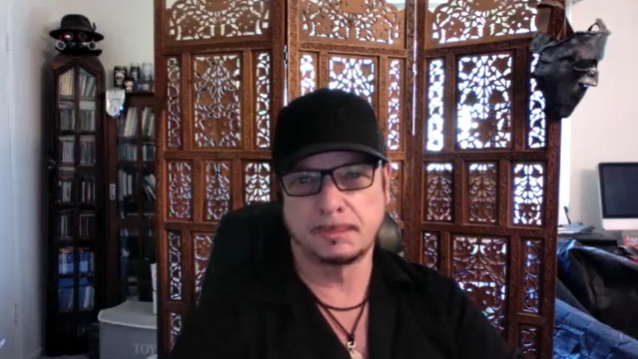 Longtime QUIET RIOT bassist Chuck Wright spoke to Rocking Jam Man about his latest departure from the band. Last summer, it was announced that Wright would be leaving the group to make way for the return of Rudy Sarzo, who was coming back to QUIET RIOT after an 18-year absence.

Regarding how the conversation went letting him know that Rudy was rejoining QUIET RIOT, Chuck said: "Well, that has happened more than once, so it wasn't really a surprise to me. And at the time that I heard he was gonna be coming back, I was doing my solo record. So it is what it is; that's where things go."

Asked if Rudy's return to QUIET RIOT was planned or if it came out of the blue, Chuck said: "It wasn't a plan from my end. You'd have to talk to them to know — I mean, talk to whoever runs their business."

Pressed about whether he would have stayed in QUIET RIOT if Rudy hadn't come back, Chuck said: "Sure. I would have still been playing with them."

As for whether he was "afraid" QUIET RIOT would break up when drummer Frankie Banali passed away in August 2020, Chuck said: "That's a good question. I really didn't know. I know he wanted the band to continue on. So I carried the torch for the music, and people wanna hear those songs, so it probably would have… it would still continue. But I don't think I was afraid of it breaking up, so to speak, or everybody going their separate ways."

Asked if he would rejoin QUIET RIOT if Rudy ever left the band again, Chuck said: "You know what? I have no idea. It depends on what I'm doing at the time."

Wright had served off and on with QUIET RIOT for nearly 40 years, appeared on nine albums, and was known as the bassist for QUIET RIOT's mega-hit "Metal Health" (Bang Your Head) and "Don't Wanna Let You Go". He was a contributing songwriter on 1986's "QRIII" and appeared in the band's video for "The Wild And The Young", among others. Wright had been one of QUIET RIOT's longest touring and recording members.

Regarding how his return to QUIET RIOT came about, Rudy told SiriusXM's "Trunk Nation With Eddie Trunk": "After Frankie told me in 2019 that he had pancreatic cancer, and then he started his fight, it was a daily fight. I mean, he would be taking multiple treatments to fight it, and he would be touring. And so it was really an exhausting thing. So we stopped kind of hanging out as much because, obviously, he was too tired. So we would text each other a lot, every day, and stay in touch.

"Chuck Wright's Sheltering Sky" will be released on May 20. It features over 30 guest performers, including members of MR. BIG, SKID ROW, TESLA, DREAM THEATER, JANE'S ADDICTION, ASIA, JEFFERSON STARSHIP, acclaimed solo artists Allen Hinds, Toshi Yanagi, Whitney Tai and many others. It covers a wide range of genres, from jazz fusion, prog, funk, to in-your-face hard rock, and will be widely available on CD and all digital platforms on the Cleopatra Records label.