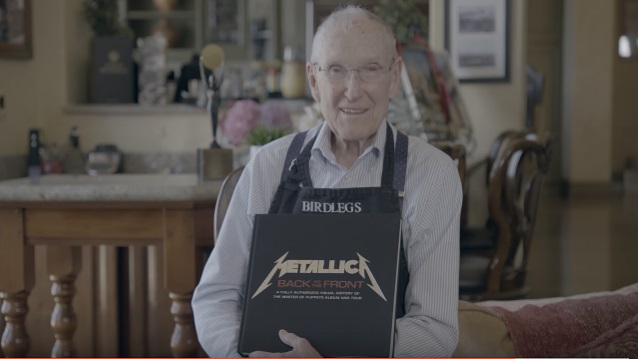 On February 5 — the day before Castro Valley, California officially declared today (Saturday, February 10) to be "Cliff Burton Day," in honor of what would have been the 56th birthday of the late METALLICA bassist — "Lamont & Tonelli" of San Francisco radio station 107.7 The Bone interviewed Ray Burton, Cliff's 93-year-old father. The full conversation can be streamed below. A few excerpts follow (as transcribed by BLABBERMOUTH.NET):

On whether he still attends METALLICA concerts:

Ray: "Oh, yeah. [Laughs] That football game yesterday in Minneapolis [ed. note: the Super Bowl], METALLICA opened that building. We were back there. It is really beautiful.

"I never did have the pleasure of riding with them. I'd just meet them at the venue. They are just absolutely wonderful kids, all of them — kids, mind you, [who are] well in their fifties now. [Laughs]"

On the petition drive behind "Cliff Burton Day":

Ray: "It brings a great smile to my face, and Cliff would have loved it — absolutely loved it."

On how Cliff got into music:

Ray: "It was all on Cliff's initiative. Cliff used to watch 'Barney Miller', that comedy detective [TV show], and he absolutely loved that bass that starts it off, so he came to his mother and me one day and said, 'Mom and Dad, I want to learn to play the bass.' We bought him a cheap guitar and a little-bitty amp, and he started on his own. We gave him three different lessons, and the final one was with a music teacher from Castro Valley, and he introduced him to classical music. That's where Cliff started putting classical numbers into his music. All of it was his initiative. His mother and me supported him all the way, but it was Cliff — he was the one that had the ambition and the love to play the bass guitar."

On what he did on his recent 93rd birthday:

Ray: "I made it pretty easy. I didn't feel all that up to par, and so they asked me what kind of fancy dinner did I want, and I said, 'Well, how about angel hair spaghetti with some shrimp?' So that was the marvelous meal that we had."

METALLICA announced the "Cliff Burton Day" proclamation on Twitter, writing, "It's official! The Board of Supervisors from Alameda County has just proclaimed February 10th, 2018, which would have been Cliff's 56th birthday, 'Cliff Burton Day.' Thanks to all of the fans who got behind this initiative. We love that he remains so revered."

The proclamation came after METALLICA fans started a Change.org petition to recognize Burton in his hometown of Castro Valley.

Petition organizer Robert Souza asked the Castro Valley Municipal Advisory Council (MAC) to back his effort, and the Council voted 7-0 in favor of it. The issue then went to the Alameda County Board of Supervisors, who voted for it on Tuesday (February 6).

IT’S OFFICIAL! The Board of Supervisors from Alameda County has just proclaimed February 10, 2018, which would have been Cliff’s 56th birthday, “Cliff Burton Day.” Thanks to all of the fans who got behind this initiative. We love that he remains so revered. pic.twitter.com/Qxy0yFptSS