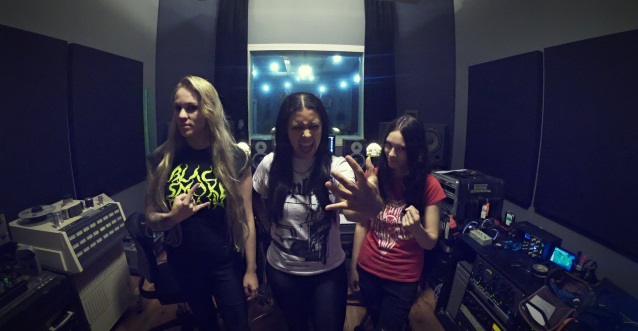 Brazilian all-female thrash group NERVOSA has entered Family Mob Studio in São Paulo to record its third full-length album, due later in the year via Napalm.

Fernanda Lira (vocal and bass),Prika Amaral (guitar and backing vocals) and Luana Dametto (drums) are collaborating with Argentinian producer Martin Furia, who worked as a sound engineer on some of NERVOSA's European tours, as well as for bands like DESTRUCTION and FLOTSAM AND JETSAM, and produced recordings for EVIL INVADERS and SISTERS OF SUFFOCATION, among others.

"I'm very excited to record with these girls I've known for a few years now. I want to bring all the energy and aggressiveness they have live for this studio album," Furia says.