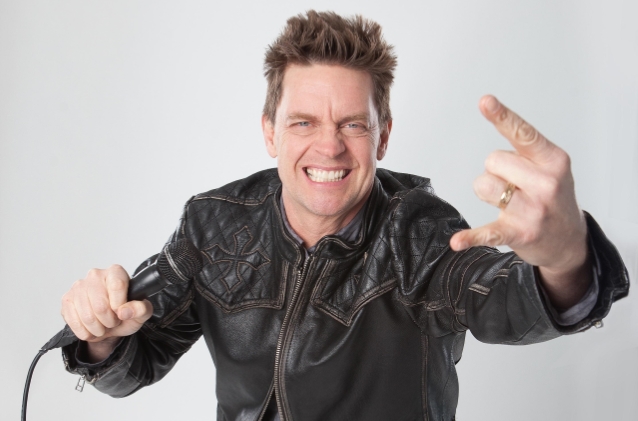 In a recent interview with the Courier Journal, comedian Jim Breuer called his stint as the opening act for METALLICA on the North American leg of the "WorldWired" tour the "greatest gig I ever had ever. Ever. Ever. It's like traveling with the best film, best TV show; this is hands down the greatest gig ever," he said. "I'm a die-hard METALLICA fan, I know the guys. Especially the way they travel, they don't work every single day so it's on, off, on, off, and being a comedian you're out on your own. It definitely gets lonely after a while."

Asked how his friendship with METALLICA sparked what he does in comedy, what they do in heavy metal, and how that goes together, Breuer said: "We became friends in the '90s. I met [METALLICA drummer Lars Ulrich] and we became friends, then I actually got really close with [vocalist/guitarist James Hetfield] and our families grew up together and our kids grew up together."

He continued: "When this came about, I think Lars said it best: 'Bands open up for us, and no one shows up for the bands. It's a bummer for them, it's a bummer for us. Now, we want to do something that's kind of a crowd experience thing in filling the arena, trying to get them in and get them excited. You don't have to be funny, just be creative.'

"I said all right ... I got this, I'm a METALLICA fan. I'm just going to imagine me sitting in the audience and what I would want to see from some guy coming out there. The energy of the metal is what I've always loved and the energy I do on stage with standup, I mean, I'm not METALLICA, but I've always extremely attracted and driven by that energy and the thought-provoking lyrics and drive. That's an attitude every standup show I go in. I go in to crush your face... and I think maybe that's why I'm so attracted to bands like METALLICA. They're coming to crush your face, and they're going to. I watch it night after night, still don't get tired of it. As a matter of fact, when they're on, you'll see me on the floor."

Breuer went on to describe what he does to warm up the audience for METALLICA. "I kinda feel the crowd out," he said. "Sometimes I'm up there a half hour, sometimes more, sometimes a little less. Once I hit about 8 p.m., I take a camera and I go backstage with a live camera, look for the band, touring the backstage, start messing with the crowd a little bit. We do game shows where I pull people out of the audience and put them on stage. I created this, which seems to be hands down the most popular thing, I created a heavy metal sing-a-long with all the best metal anthems. The crowd, they go crazy with that. It's like [JUDAS] PRIEST and OZZY [OSBOURNE] and AC/DC, they go bonkers. It's awesome. Every 10-15 minutes there's something going on to keep you engaged and keep the energy up."

Breuer, who has been in the entertainment industry for more than 20 years, has toured as the opening act on "WorldWired" since September 2018.