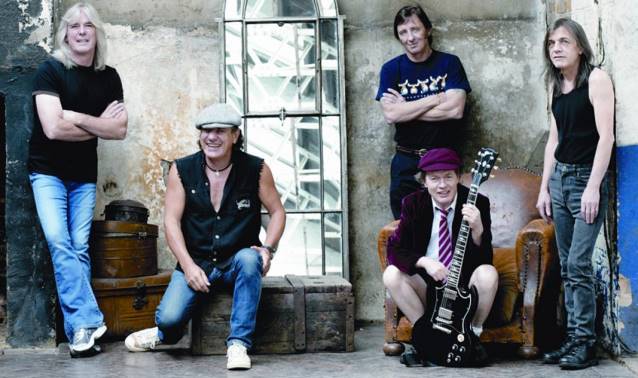 **Update** -- April 15 at 4:35 a.m. EST: Mark Evans, who says that he is the son of original AC/DC singer Dave Evans, tweeted a few hours ago that reports of AC/DC's imminent retirement announcement are not merely rumors. He added: "Malcolm Young is very sick.... [Malcolm's son] Ross Young spoke to my father this morning because the cat got out.... But yes, the band will be finished…. No new shows or music."

**Update #2** -- April 15 at 12:00 p.m. EST: Australian journalist Darryl Mason writes on The Orstrahyun: "More than a month ago, founding member, rhythm guitarist, co-producer and co-songwriter Malcolm Young had a stroke, which left a blood clot on his brain. When AC/DC reunited at the start of April to begin a month of rehearsals, in the lead-up to new album recording sessions, Malcolm discovered he couldn't play. At least, he couldn't play like he used to play."

As of right now, AC/DC has not commented on any of the rumors and published reports.

According to The Australian, a "music industry source" has confirmed that AC/DC has booked a recording studio in Vancouver, British Columbia, Canada for six weeks from May 1, directly contradicting other Australian media reports that suggest the legendary rock hard rock band is about to announce its retirement.

An ubsubstantiatted report from Australian radio station 3AW appeared Tuesday morning (Australian time) saying the band could announce its retirement decision as soon as tomorrow, with the station's entertainment commentator Peter Ford saying that “we may not hear them perform or record ever again." He added that "there was some sad detail" behind the move, indicating that "Malcolm Young, one of the founding members of the group, has in recent times returned to Australia to live with his family and for his own personal reasons he may not want to continue with the band."

If AC/DC does end up recording a new album this spring, the project will be the first set of new AC/DC material since 2008's "Black Ice" CD. In addition, the band was previously expected to celebrate its 40th anniversary this year by playing 40 shows in selected cities around the world which have not yet been announced.

The plans were revealed by singer Brian Johnson in a surprise phone call he made on February 14 to a radio station in West Palm Beach, Florida. Johnson is a resident of the state.

Asked about the group's plans, Johnson said, "We've been denying anything, 'cause we weren't sure. One of our boys was pretty ill, so we didn't like to say anything, and we're very private about things like this, so we didn't wanna say anything. But I think we'll be going in the studio in May in Vancouver. Which means, we should be getting ready."

Johnson added, "It's been 40 years of the band's existence, so I think we're gonna try to do 40 gigs, 40 shows, to thank the fans for their undying loyalty. I mean, honestly, our fans are just the best in the world, and we appreciate every one of them. So, like I said, we'll have to go out, even though we're getting a bit long in the tooth [Laughs]."

Johnson alluded to one of the members of the band being ill in a 2012 interview, adding that the unnamed member was "getting better" with a "full recovery fully expected."

Meanwhile, bassist Cliff Williams hinted in March 2013 that guitarists Angus and Malcolm Young were writing music for the band's next album.