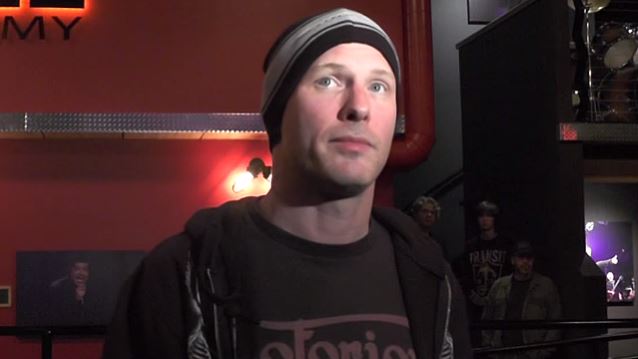 COREY TAYLOR: 'I Don't Think Rock Is Dead. I Think The Old Way Is Dead.'

SLIPKNOT and STONE SOUR frontman Corey Taylor took part in a question-and-answer session with music students at the Brennan Rock & Roll Academy in Sioux Falls, South Dakota on November 9. Check out video footage of the session, as well as an interview with the B102.7 radio station, below. A couple of excerpts follow (transcribed by BLABBERMOUTH.NET).

Corey: "This is the problem with technology, [which] is that there was a whole explanation behind what Gene was trying to say that has been filtered out, because people take that one-liner and they turn it into a microcosm, and that just kind of becomes whatever. With all due respect to Gene, I think the old way is dead, but the new way seems to have a foothold and it's allowing bands like ourselves and other bands around the world to use that technology as a new way to promote rock and to promote heavy metal. So I don't think rock is dead, I think the old guard is dead. And a lot of it is because the record label system couldn't figure out a way to live in a system with the technology the way it is. But in a lot of way it's good for the artist, because it puts the power back on them. And now you're seeing more and more independent artists really be able to use the Internet as a tool to get their music out everywhere, whereas before you had to wait for the record label to give you the money to do it, to put the money up for distribution and everything like that. So I don't think rock is dead. I think the old way is dead. We just had a No. 1 album, so if it's dead, then this zombie's swinging for people."

On how he manages being in two very popular bands:

Corey: "It's all about priorities, to be honest. For me, it's always been very simple. I'm in two great bands who are very understanding and they let me kind of get away with it, in a way. But when I'm working on SLIPKNOT, that's my focus. We're working on an album, [then] we're gonna tour. When I do STONE SOUR, it's the same thing: working on the album, then tour. So with the exception of getting together and working out things to tide the fans over between [album-tour cycles], it's all about your focus, it's all about your time, it's all about the amount of attention that you give to it. When I'm working on something, that's all I'm doing. So I've been able to — hopefully successfully — manage that time correctly and make sure that everybody is getting the kind of attention and focus that they need while not selling out the music, or watering it down, really. Because music is honestly the only thing I'm good at — besides making people laugh, for the most part. And even that, I don't even know… You might just be nice to me. Which, please, be nice all you want. But, you know, it's the one thing that I just know instinctively I do differently than other people, so when I'm making music and performing music, that's all I care about."

Corey: "I just instinctively know. The thing that I get asked a lot if, 'How is 'Snuff' a SLIPKNOT song?' Especially when it was first released, people were, like, 'What? What?' And I'm, like, 'You have to listen to it,' because the honest truth is I wrote that song specifically for SLIPKNOT, because of how heavy the subject matter was, how dark that sadness and melancholy can go, I knew just instinctively that SLIPKNOT would be able to put the edge in that music. And now, as time's gone on, people look at it in context and go, 'Oh, right. I get it.' But the problem is that anytime I sing melodic with SLIPKNOT, people call those STONE SOUR songs, and then on the other side of that, anytime I bark out and get crazy with STONE SOUR, people are, like, 'Oh, it's a SLIPKNOT song.' And I'm, like, 'No, not really. Not if you listen to the music.' Both bands are made up of very distinct and very awesome players. So [people] just kind of have to listen to it with different ears."

Brennan Rock & Roll Academy founder Chuck Brennan has a lifelong love for rock and roll. Before founding Dollar Loan Center in Sioux Falls, Brennan opened and operated one of the largest rock concert halls in the Midwest, The Blitz Ballroom.

In order to rock at the Brennan Rock & Roll Academy, a youth must be a member of the Boys & Girls Club.

By participating in the Brennan Rock & Roll Academy, students will go through their own unique musical journey. In addition to learning to play instruments or sing, youth will learn how to work in groups and gain confidence that will serve them throughout their lives.