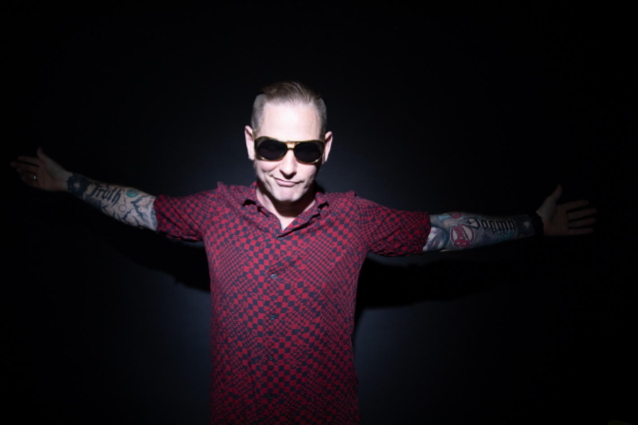 COREY TAYLOR: 'I'm Probably The Happiest I've Ever Been'

In a new interview with BBC Radio 6 Music's Mary Anne Hobbs, SLIPKNOT frontman Corey Taylor was asked if he is happy with his life right now. He responded (as transcribed by BLABBERMOUTH.NET): "I'm probably the happiest I've ever been. And obviously for, whether it's my wife, my kids, my career right now, everything seems to be cresting. Which is good, because for a long time, the work was great but my personal life was just in shambles. Right now is probably the best that I've ever felt — ironically, because I'm starting to get up there. And I'm starting to learn that life doesn't end after a certain age; it just gets a little sweeter. You appreciate the things that you have a little stronger. And honestly, that's a great metaphor for where we are with SLIPKNOT as well, because we've all gotten to the point where it's, like, we're still here; after this many years professionally, we're still here. And it's great to be able to look back and go, 'Man, we did something really special.' So, am I happy? Today? Yeah. That could change tomorrow. But as of today, I'm incredibly happy."

Two years ago, Corey told Clash that he had a lot to smile about.

"It's interesting, man. Before all of this, actually about five years ago, I was going through one of the darkest times of my life," he said at the time. "My life was in upheaval. I was getting toward the end of a really toxic marriage and was taking the steps to get out of that. My health was really bad; I'd had spinal surgery and was unable to work out and exercise like usual. I gained some weight through that and was depressed with everything. I was in a really dark spot, man, I was in a bad way. Trying to focus and stay through that was tough. But the changes and decisions that I made over the next four years really got me to where I am now."

He added: "I'm happier than I have ever been, I'm not satisfied — but I'm pretty content with everything. My kids are fine, my wife is amazing, my career is doing really well. I mean, this is as close to the best time of my life that I have ever been, man. It's good to feel. Sometimes I feel suspect and I'm, like, 'Hmmm, what is going on here?' It's weird, your brain keeps doing crazy shit like that and you've gotta take a step back and be, like, 'It's cool, dude. Just chill. Not everybody is trying to get you.'"

Taylor recently revealed that he will enter the studio in January and February 2023 to record his second solo album. "About 15 songs" will be tracked for the follow-up to 2020's "CMFT", which will showcase "a darker edge" but will still be "very melodic," he told SiriusXM's "Trunk Nation With Eddie Trunk". "And it's less an homage of the stuff that I grew up on and more of what people are used to hearing from me — but still a solo album," he explained. "So there's still great rock and roll on it. There's some heavier stuff, but there's some really great slower stuff. It's gonna be really rad."