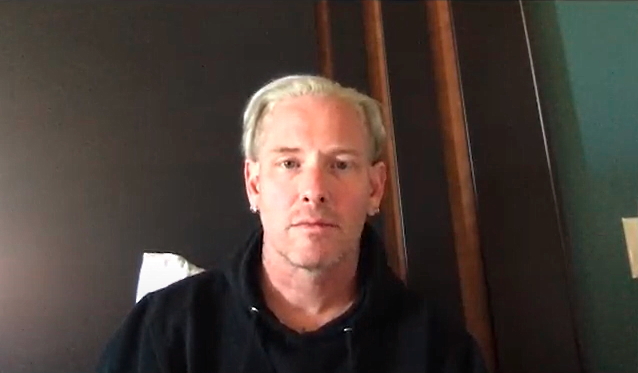 Celebrating his contribution to "The Metallica Blacklist", Corey Taylor sat down for a four-part conversation with Knotfest.com's Ryan J. Downey. In part two of the chat, the SLIPKNOT and STONE SOUR frontman talks about his love of 1980s televisions shows "Headbangers Ball" and "The Young Ones"; great riffs; and the parallels between METALLICA and SLIPKNOT.

"One of the first songs I ever learned how to play on guitar was 'Enter Sandman'," Taylor said (as transcribed by BLABBERMOUTH.NET). "Because that was kind of our generation's 'Stairway To Heaven' or 'Smoke On The Water'. It's one of those riffs that… I like to call if the Guitar Center virus. Anybody who comes in [at a Guitar Center location] is either playing 'Sandman', 'Crazy Train', 'Smoke On The Water' or 'Stairway' or 'Whole Lotta Love'… You have those gateway riffs where you go, 'Oh, I figured it out.'

"I sat down one day, as I got better at guitar, and I went back and listened to the first four METALLICA albums and just started woodshedding and learning all these riffs. And it became a sort of language that you could speak to other musicians when you're jamming for the first time. If you kicked into 'Blitzkrieg' or something, or if you kicked into 'Ride The Lightning' and just started [playing the opening riffs of the song], and they kicked in with you, you knew you were off to the races, because you don't just learn that riff; you learn the whole tune and you just go for it. So it was almost like an initiation in a weird way; you knew how to do it. So I played METALLICA in almost every band that I've been in; it's always just been there. I mean, from my first sort-of-real band CRIMINAL MISCHIEF all the way up to my solo band."

Taylor's cover version of the METALLICA classic "Holier Than Thou" is included on the aforementioned "The Metallica Blacklist", a four-hour, 53-song collection of the "Black Album" covers spanning an unbelievably vast range of genres, generations, cultures, continents and more, with each artist contributing a unique interpretation of their favorite "Metallica" LP cut.

Back in 2017, Corey singled out METALLICA's "Master Of Puppets" as "the greatest modern heavy metal album ever made." He said: "[It is] heavy and yet it's so fucking melodic. It is badass and yet it has moments of pure fucking contemplative cool flow stuff. It is sludgy and yet will rip your fucking head off. And it has the best METALLICA song ever written, 'Disposable Heroes', on it. That fucking song is a clinic, not only in alternate picking, but also down picking. I can't play it, and I can play almost anything. That's how good it is." [The LP has] got some of James [Hetfield's] best performances, and the whole band is amazing on it. And it's got some of his best lyrics on it. You listen to it and you're like, "This is criminal, how fucking good this album is."