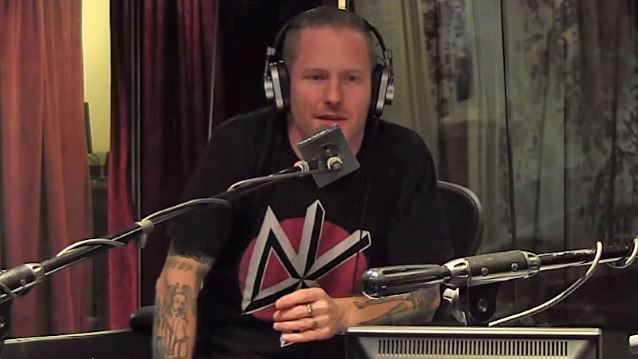 Taylor revealed a few years ago that when SLIPKNOT was on the same festival bill with GUNS N' ROSES in Europe, he was told only GN'R members were permitted in a certain corridor. The SLIPKNOT vocalist proceeded to sneak in, play Rose's grand piano and place he genitals on the piano while playing a few notes.

During an appearance on the July 9 edition of the "Opie Radio" talk show, a listener called in and derided Taylor for messing with Axl's piano, arguing that Rose "has more musical talent in his pinkie" than Corey has in his "entire friggin' body."

After explaining that fans know and accept that they will be forced to wait for Axl and the rest of GUNS N' ROSES to begin each concert, the listener pressed Taylor about the piano incident. He asked: "How dare you do that to someone like Axl?" Corey responded (see video below): "Knowing Axl, it's quite easy, my friend. I mean, anybody who makes his fans wait for two to three hours for him to go on stage, I have no respect for…"

He continued: " I love GUNS N' ROSES, dude. I love 'Appetite [For Destruction]'; I think that's a fantastic album. But when you make your fans wait that long — and I don't give a fuck what hard-on just said: 'Oh, we expect it.' Well, you're a fucking idiot then. All right? Figure it the fuck out."

Taylor added: "You know why there are really no original fucking members of GUNS N' ROSES left? Because [Axl] made 'em wait three fucking hours! You want an 'Appetite' reunion? Tell him to fucking stop being a douchebag."

GUNS N' ROSES keyboardist Dizzy Reed, not an original member of GUNS but a 25-year veteran of the group, told The Pulse Of Radio that unpredictability has always been part of being in the band. "The volatility is definitely still there, especially for me, because I've seen a lot," he said. "It keeps you on your toes for sure. I just show up every night as prepared as possible to do my job, and anything else that happens is out of my control. There's really no way to truly deal with that."

Taylor released his third book, "You're Making Me Hate You: A Cantankerous Look At The Common Misconception That Humans Have Any Common Sense Left", on July 7 via Da Capo Press, a member of the Perseus Books Group. The book acts as a commentary on society and pop culture and has been described as "Taylor's take on Peter Griffin's 'You Know What Really Grinds My Gears'."

Taylor is promoting the book with a combination of bookstore events and a solo tour which are one-of-a-kind shows featuring readings from the book, acoustic performance, and audience discussion.