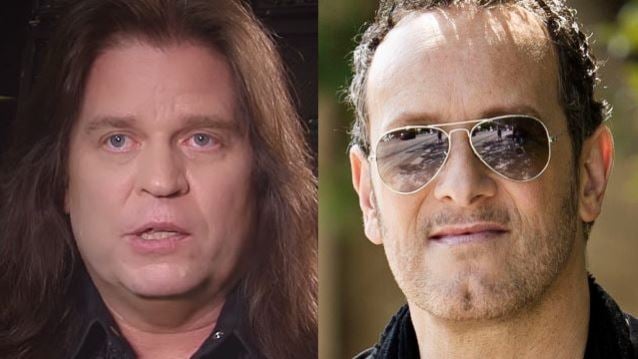 CRAIG GOLDY On VIVIAN CAMPBELL: 'He Just Seems Determined To Hold On To A Grudge'

Former DIO and current DIO DISCIPLES guitarist Craig Goldy says that Vivian Campbell "seems determined to hold on to a grudge" three decades after the current DEF LEPPARD axeman was fired from DIO.

Cambell, along with drummer Vinny Appice and bassist Jimmy Bain, was part of the original DIO lineup, which reunited in 2012 alongside singer Andrew Freeman to form LAST IN LINE.

Asked by Eric Blair of "The Blairing Out With Eric Blair Show" at last month's Bowl 4 Ronnie bowling party in Studio City, California why he thinks Vivian seems to still be so bitter over his exit from DIO three decades ago, Craig said (see video below): "Well, first of all, [Cambell, Appice and Bain] were the original lineup, so I understand that they feel that they have every right to [play DIO songs with LAST IN LINE]; I understand that too. I loved what Vivian and those guys created: 'Holy Diver', 'Last In Line', 'Sacred Heart'. That's why a lot of the times when we're doing 'Rainbow In The Dark' or 'Don't Talk To Strangers' or 'Last In Line', I play his solos note for note, but with just a little bit of a flavor of my own. Because I honestly love what they gave and what they did."

He continued: "I hate the fact that there's so much bitterness — still. I wish that it would just be… It's a family. You know, just let it go. Just let it go.

"Could you imagine if everyone who's ever been in this band got together for a 'We're Stars' [Hear 'n Aid collaboration of various individual hard rock and heavy metal artists to raise money for famine relief in Africa] type of thing? Everybody? You know, we lost our opportunity with Jimmy [who passed away unexpectedly in January 2016]. What are we gonna do? Is [Vivian] gonna wait until he dies before he says, 'Okay, I'm sorry. Ronniewas great.'? What is he hanging on to, and why?"

As a longtime friend and bandmate of Ronnie James Dio, Goldy says that he cannot comprehend why Campbell would remain angry for so long at a man that many have lived well into a realm of kindness, consideration and gallantry most people don't expect from the most luminous of rock stars.

"I know Ronnie, and I can't imagine him being so… I don't know what happened between those two, but I can't imagine that it was that vile for him to hang on to that," Craig said. "I mean, some people just hold a grudge. And I love Vivian Campbell's music. And I don't know… For all I know, Vivian Campbell might be a wonderful human being who just happens to be one of those guys who holds on to a grudge. That's all it seems like — he just seems determined to hold on to a grudge."

Vivian recently slammed DIO DISCIPLES — which is made up of former members of DIO, along with a rotating lineup of singers, including former JUDAS PRIEST frontman Tim "Ripper" Owens — saying that DIO DISCIPLES have "zero credibility" as a Ronnie James Dio tribute project despite the fact that the band is fully supported by Ronnie's widow/manager, Wendy.

DIO DISCIPLES is billed as a "celebration of the music and legacy of the greatest singer in the world, Ronnie James Dio." The band also notes that "we could NEVER replace Ronnie and that is NOT our intention. There will only ever be one Ronnie James Dio!"

Campbell was fired from DIO in 1986 after a contentious business disagreement with Ronnie James Dio and band management.