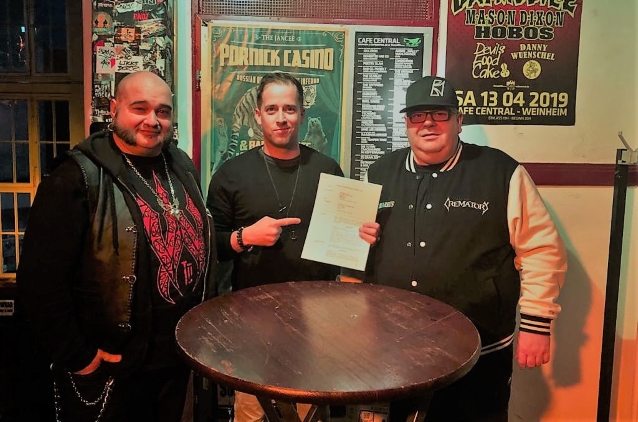 CREMATORY Signs With NAPALM RECORDS; New Album Due In 2020

German metallers CREMATORY have inked a deal with Napalm Records. The band's next studio album will arrive in the spring of 2020.

CREMATORY has also partnered up with Napalm Events Booking as its new worldwide booking agency. A massive tour will follow the release of the new disc.

One of the pioneering acts of the fertile European goth metal scene in the 1990s, CREMATORY began as a strict death metal unit in 1991 before adding goth and industrial elements to its arsenal. In its 28-year career, the band, centered around original members Markus Jüllich and Felix Stass, released 14 studio albums, three live albums, various compilations and splits and played hundreds of shows around the globe.

Comments CREMATORY on the signing:  “We are looking forward to the cooperation with Napalm Records and Napalm Events Booking and we are happy to announce the release of our new studio album and tour in spring/summer 2020.

"After 28 years of CREMATORY, it's great to be a part of Napalm Records and Napalm Events Booking, with their worldwide connections, distribution and their great promotion department. They are one of the leading metal labels in the world."