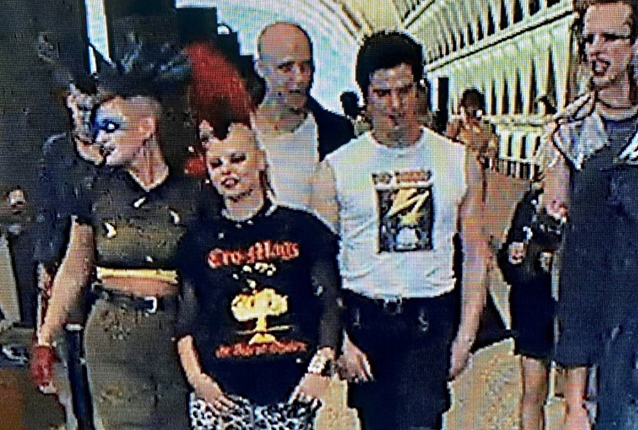 Former CRO-MAGS singer John Joseph has defended the makers of "Wonder Woman 1984" over the use of the band's imagery in the movie.

"Wonder Woman 1984" is set in Washington D.C., and its pivotal scenes take place in iconic parts of the U.S. Capitol. In one scene, Wonder Woman (Gal Gadot),disguised by day as Diana Prince, a researcher of antiquities at the Smithsonian Institution in 1984, and Steve Trevor (Chris Pine),are walking through a metro station and pass a group of punks, one of whom is wearing a CRO-MAGS "The Age Of Quarrel" t-shirt. This led some fans of the band to point out an alleged historical inaccuracy by noting that the LP didn't come out until 1986.

But as it turns out, not only were they wrong, the t-shirt actually came from Joseph, who is a longtime friend of "Wonder Woman 1984" writer/director Patty Jenkins.

On Saturday, Joseph took to his Instagram to share a screenshot of the above-mentioned scene, and he wrote in an accompanying message: "Had about twenty people tell me about this. Patty Jenkins Director/Writer (Monster - Wonder Woman etc.) is a good friend since the 80's - she asked me to send her a CRO-MAG shirt for the new 'Wonder Woman 1984' released today. I sent her this 'Age of Quarrel' tee-shirt. The original album (black cassette) came out in 1984. Me and Parris (guitarist) paid for the recording. His father owned a pressing plant in Nashville and pressed up the tapes. Here's some trivia too. - I got Patty her first directing gig. It was for the band LEEWAY - Three Wishes video. She went to film school in NYC but grew up in DC - is a huge @badbrainsofficial fan too!"

The metro scene wasn't the only punk reference in "Wonder Woman 1984". In another scene, "Saturday Night Live" alum Kristen Wiig, who portrays Barbara Minerva, a.k.a. The Cheetah, walks by a poster for a hardcore concert featuring MINOR THREAT, which split up in 1983. It didn't take long for one Twitter user to figure out that the poster is apparently promoting a show that was held at the Gainesville, Florida club Roach Motel, which makes its appearance on a wall in Washington D.C. that much more unlikely.

Joseph, whose real name is John McGowan, was an on-and-off frontman for the CRO-MAGS during 1980s and 1990s, with founder Harley Flanagan the only constant member during that period, taking over the frontman and vocalist role. Flanagan and Joseph briefly reconnected and performed together again in 2001 to 2002, after which Flanagan stepped away upon the birth of his son. Starting in 2002, Joseph and drummer Mackie Jayson toured regularly as the CRO-MAGS without Flanagan's permission, mostly performing songs from "The Age Of Quarrel". In 2018, Harley sued them in Manhattan federal court in 2018 claiming Joseph and Jayson had taken control of the group. Flanagan said in the lawsuit that he had registered the CRO-MAGS trademark for merchandise in 2009, for recording 2010 and then renewed it in 2017.

Uhhh Wonder Woman 1984 has a girl in the DC metro wearing a Cro-Mags shirt with the Age of Quarrel cover except that record didn’t come out until 1986! @GalGadot plz fix

Spotted in Wonder Woman 1984: a Cro-Mags “Age of Quarrel” shirt... which didn’t come out until 1986. Continuity error, or time traveling punk?

Ok second punk continuity error: there was a minor threat flyer in the background of a shot - they broke up in 1983. I’d like to offer my services in punk rock continuity consulting

Why would Wonder Woman 1984, a film set in 1984, have someone wearing a Cro-Mags Age of Quarrel shirt when that album came out in 1986? Delete the whole franchise. Everyone involved should be blacklisted from making films again. pic.twitter.com/u98LOC6NhY