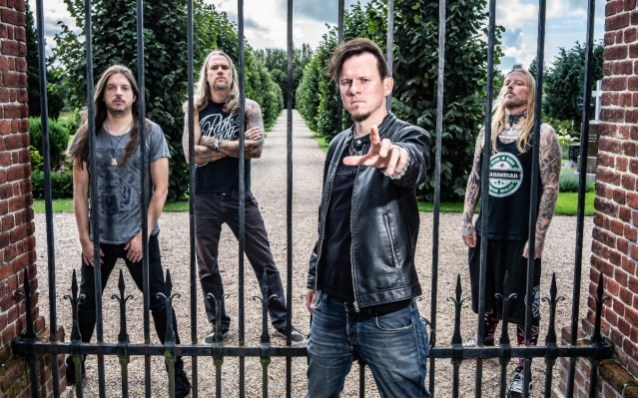 CYHRA vocalist Jake E says that he is not worried about the possibility of guitarist Jesper Strömblad leaving the band.

Strömblad has been sitting out recent live appearances by CYHRA for reasons that had not previously been disclosed. Continuing to fill in for him is Marcus Sunesson, who has previously played with ENGEL.

Asked in a new interview with Metal Covenant if he is concerned that Jesper might exit CYHRA, just like he has several of his previous projects, Jake responded: "Not [in] the least. I won't talk shit about other bands whatsoever, because I don't know about their background story. But the way I see it is that Jesper hasn't gotten enough support for his problems. In our band, he has 2000 percent support, and he has done everything he can."

Jake continued: "He toured with us for a year and he really felt like shit, because he suffers from social stress, for instance. He suffers from depression. He has problems with open spaces and crowded places. He has a hard time with traveling and not feeling that it's home. He has made one hell of a journey and has become free from all those drugs and alcohol and stuff. I don't think anyone can comprehend how bad he feels and how bad he's been feeling. Obviously, it's been up and down. But I would never put pressure on another person, like, 'You're gonna do this now, okay!' What we have said that this is our band and he does his part. He writes songs, he's playing with us, he's doing videos — I mean, to the extent that he is able to do so. But to put pressure on someone will only knock it over in the end, I think. And I think a big reason for him leaving bands is that he has put too much pressure on himself, started drinking again, made the band angry since he has screwed things up because he has tried to suppress his anxiety with alcohol or other substances, which makes gigs go straight to hell. Now he's in a program where he's fighting to get rid of these problems."

The vocalist added: "He has our full support. I'm not worried at all. If that day comes, he will come to me instead of reaching to a point in a band where somebody makes a fool of himself so that you look stupid. This band means everything to Jesper as well. He loves this band. If Jesper would say that he won't play with us anymore, he would say, 'Well, I'll step aside,' under controlled circumstances, if you know what I mean. Which, of course, I hope will never happen."

Strömblad quit IN FLAMES in February 2010 in order to continue receiving treatment for his alcohol addiction. He then formed THE RESISTANCE with Marco Aro (vocals, THE HAUNTED) and Glenn Ljungström (guitar, ex-IN FLAMES),only to exit that band in March 2016. THE RESISTANCE bassist Rob Hakemo later slammed Jesper in an interview, calling the guitarist "an alcoholic" and "drug addict" who "doesn't want to [get] sober."

CYHRA's second album, "No Halos In Hell", was released on November 15 via Nuclear Blast Records.

The band has just completed a European tour with BATTLE BEAST.