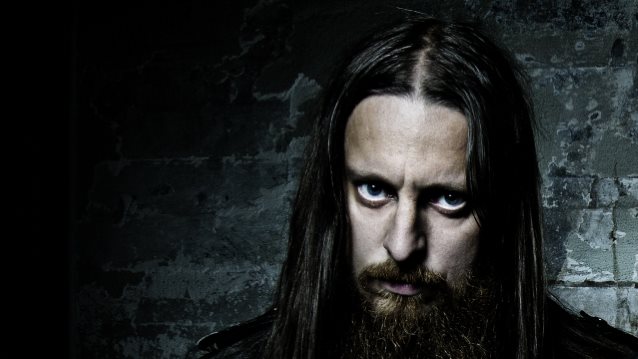 Gylve Nagell, better known as Fenriz of the long-running Norwegian black metal band DARKTHRONE, has explained how he was forced to serve his local council for the next two years after a joke campaign saw him actually elected into office.

Fenriz agreed to run in the election to make up numbers for the council’s "backup list," but never anticipated that he would be successful.

As election season approached, Nagell sensed he might actually have a chance at winning. So he did what anyone in his position might and set out to sabotage his bid. His campaign was a picture of him holding his cat saying, "Please don't vote for me."

Regarding how he eventually came to be elected, Fenriz wrote on his band's Facebook page: "I have reached a place in my life where I do NOT answer an unknown number. But on that day, that fateful day (early 2015),I was waiting for electricians to show up to change our spotlights from normal to LED. So I took the phone. One of the pleasant leaders of Venstre, it was (insert yoda speech).

"I had the best childhood times here and children+middle schooling was superb, and the second we moved to the south side of the Gjersjøen lake from here, I missed Kolbotn. That was the summer of 1987 and each year i yearned. More and more. I also moved to Oslo there for a while but never longer than 15 kilometres away from here. So each year I would go back here, take walks, visit friends and just feel that shiver in my bones and soul.

"After I got married in 2013, I was so obsessed that I had one of my bicycles in the forest here (in three different spots altogether) so I could reach more ground on my trips back here. I think in 2012 or 2013, I had 40 or so trips back here, so even though my day job place had moved to the very wrong side of Oslo, we decided to move back anyway. I had already subscribed to the local newspaper for a while and had also written in it about my whole process of moving back here. Adorable, I'm sure! Haha! And DARKTHRONE is probably the most well-known international act from Kolbotn, so you can say I 'had a name' here.

"And so I thought that, even though I never voted for Venstre earlier (small party right smack bang in the centre of the Norwegian political axis of 9 main parties),this could be a good opportunity for me to find out more about how my burrow actually works. I cared so much about the place already and I would surely find out more now.

"Every political party that wants to run for election to get candidates has to have a certain number of people on the list. Common problematics in Norway is that parties lack list candidates. They said I would be 'safe' down on the list as number 18 cirka and that chances for being elected was minimal. A bright leader of the party said that she wanted to Facebook post that I'd said yes with the press statement which was a short interview/presentation of me saying that I was very busy, had little time and much work and really needed my calendar as empty as possible. And liven it up with a photo with our cat, Nugatti.

"Come September and the election, and I had halfway forgotten about it all when the head honcho called me and asked if I was ready for my tasks. I had gotten a whole load of votes both from others and the ones that voted for Venstre and I was suddenly Nr. 4 on the list which is here called 2nd VARA and the last town hall meeting where we vote yay or nay to local political decisions was on monday this week.

"I feel I represent Kolbotn as being one of the known figures from here and I attend the home games of the soccer women here (currently Nr. 4 in the country, long tradition for women's soccer here, I even tattooed the sports banner back in the '90s). I am in the local newspaper here and then, I like to be here all the time and bike around or walk, I pick litter and so on. I am also the initiative-taker of Hellerasten fotballklubb, a soccer practice system for a lot of the musical personalities from here and other friends and locals.

"Let's just say that I am very enthusiastic about the area and have always been.

"I am supposed to check the town hall's web every day to read political documents, but this is a formality and those political documents are taken care of by certain special groups or the upmost leaders of the local parties. What I have to do BY LAW is step in at the town hall meetings and vote if Nr. 1 or 2 can't make it. Apart from that, I find it useful to attend most group meetings and also check the documents on the town hall webpage from time to time. As everything else almost in this life now, there is a lot of emails, yeah.

"I really do not have time for this as I have my radio show, the DARKTHRONE job, the music journalist job, and working part time 70% in the postal industry (where I have time to hear all the promos that enable me to do the radio and journalist jobs). I am always thinking of retiring (like THAT's gonna happen, I am alive to spread other people's music) and I am thinking this is one of the first interests that has to go because of time issues.

"And the cat's name is Nugatti."

Thank you all for responding and sharing and caring so much about BOLT THROWER. This week has been depressing for me as...

Posted by Darkthrone on Thursday, September 15, 2016