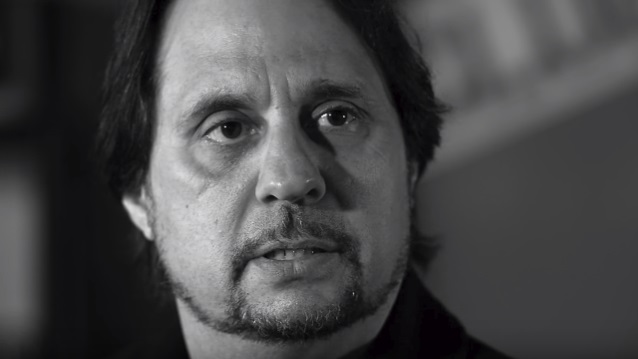 Drumtalk, the video podcast by German drummer and videographer Philipp Koch, conducted an interview with former SLAYER and current SUICIDAL TENDENCIES drummer Dave Lombardo prior to the latter band's January 28 concert at Turbinenhalle in Oberhausen, Germany. The chat, which has just been posted on YouTube, can be seen below. A few excerpts follow (transcribed by BLABBERMOUTH.NET).

On his approach to drumming:

Dave: "It's changed. My first album, I recorded when I was 18. I'm 51 now. You learn how to be a more dynamic drummer. But also, the music, the records that I recorded, like [SLAYER's] 'Show No Mercy', 'Haunting The Chapel', 'Hell Awaits', those were all written for drums that needed to be heavy. The drums needed to be heavy and played hard and fast on those records. I think if another band came to me and said, 'Dave, do you want to play a different style?' I would and you'd hear the difference. You have to adjust to the different style. Every solo that I do is not prepared. I love improvising. I think that is one of my fortes. I discovered that capability or I discovered that there were other people that were able to do that when I joined FANTÔMAS. Because in FANTÔMAS, Mike Patton [vocals, also of FAITH NO MORE] introduced me to John Zorn. And John Zorn saxophone [player] and composer, we performed together. I don't know…we connected musically on a different level than most musicians that rely on sheet music. We were able to communicate without having any kind of structured music. I quickly learned how to just, if I listen to a guitar player, if I hear a guitar player and he's performing something and what I notice, like the first two or three notes, I'll pick up on those and I will have a drumbeat for him. So when I'm improvising onstage with Zorn and [bassist] Bill Laswell, it's all spontaneous. I will hear something and I will carry it on from there. It could be one note, two notes, just one bend on a bass note or just one note on a saxophone. Then we all fall in together and we start creating and writing a piece by improvising."

On playing with musicians with big egos:

Dave: "I don't like guys like that either. I walk into a room sometimes and people don't know who I am and then I see their attitudes and then when they find out who I am, then they drop their guard. 'Oh, Dave. How are you?' Before that, they had all this ego. It's like… I don't deal with people like that. I don't bother with people like that. My dad always said, 'Never think you're better than anyone else.' I've held that throughout my life. I am first, a human being like everybody else. I just have a different job and just because I have this job, it doesn't put me into power to treat people different or to use people or anything like that. I don't like people like that. I refuse to be one of them. Sometimes I can tell you that maybe I do get grumpy and if I'm tired and I don't want to talk to anybody and I just go straight to my dressing room and fans are asking for photographs, and hey, I'm sorry, but I'm also human. Sometimes I just don't want to do things. Or, it's the construction worker that goes home and then the wife tells him, 'Hey, can you help build the house?' It's like 'I don't want to build the house!' I like my fans. I'm happy in my job. I love my career, I love what I've done. I love that I've made people happy. I love that I've made people, or helped people through tough times, some drummers say, 'Dave, when I listen to your drumming, it takes me away and puts me in a different headspace and it saved my life.' I hear that and you know, it's special. I'm not going to be arrogant or self-centered. It doesn't go. It doesn't work with me."

On recreating a previous drummer's parts when he's tapped as a replacement:

Dave: "I think a classic example, not only SUICIDAL TENDENCIES, but the MISFITS as well, I had to listen to the old records. I had to listen to the songs. Again, you have to listen very closely to what the song is saying and what the mix and the recording was. The spirit. You got to sense or feel the spirit of the song. You try to emulate that. You try to pay respect to the original recordings and not add more. What you want to add is just life, new life into that music. Like I said, the MISFITS music was recorded in the late '70s and I fell in love with that music, it's phenomenal. There's a lot of new songs with SUICIDAL that I never heard before that I really love, too. I think, not only in punk, metal or thrash, but I feel if I was put in a totally different, totally different genre, style, I feel I would be able to adapt well because again, it starts with the music and what you're listening to on the record. I've noticed, there were things that I've seen — and these songs are classic songs — the drummers don't pay respect to those rhythms or the style or anything. They just play whatever they want. It's not good. Sometimes when they listen to the record, they don't understand what the drumbeat is. Like, usually, the record is eighth notes on the hi-hat like on a punk beat. You do a beat like that, but some drummers do this [mimics style] and that's not the feel. You want to drive that hi-hat, the hi-hat is very important especially in punk and thrash music. I think that gives it some of the energy that is required to boost up a song like that."

SUICIDAL TENDENCIES' "World Gone Mad" album was released in September 2016. The follow-up to 2013's "13" disc was SUICIDAL's first to feature Lombardo and guitarist Jeff Pogan, who replaced Nico Santora in May 2016.