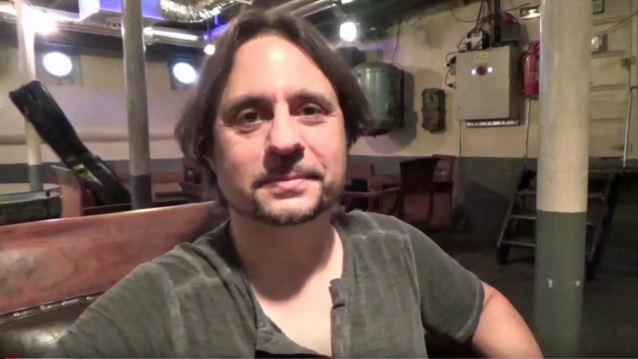 Metal Wani's Anne Catherine Swallow recently conducted an interview with former SLAYER and current SUICIDAL TENDENCIES drummer Dave Lombardo. You can now listen to the chat in the YouTube clip below. A couple of excerpts follow (transcribed by BLABBERMOUTH.NET).

On the upcoming SUICIDAL TENDENCIES album, for which he recently laid down the drum tracks:

Lombardo: "I think it's very typical and very traditional SUICIDAL TENDENCIES. It's that style. It's Mike Muir and he was a very special style in which he writes his music and his lyrics and his structures. And I love it; I love it. It takes me back to how it all started, which was that punk attitude. I'm very happy to be a part of his organization. I feel very welcomed. I feel very much appreciated, and there's a lot of respect amongst the musicians, and camaraderie. We have a really good time together. We hang out as a band, which is important; I feel it's very important."

On whether he remembers the first time he discovered SUICIDAL TENDENCIES' music:

Lombardo: "Yeah. 1982. I remember going to one of their shows in Orange County, which is a city in California, and seeing them play. And then we played together some shows — SLAYER and SUICIDAL. We played San Francisco. We day Day In The Dirt together. There's pictures online; you can see pictures of SLAYER and SUICIDAL together. Rocky George was the original guitar player for SUICIDAL, [and he] was [late SLAYER guitarist] Jeff Hanneman's best friend for a long time. Jeff was very much inspired by SUICIDAL… SUICIDAL, as well as punk music. So there's a lot of history there. We've known each other a long time."

On his reaction when he first heard of Nick Menza's (MEGADETH) death:

Lombardo: "I had just seen him in November, I believe. I saw him back in November. We played a show together — his band OHM: and my band PHILM. And it saddens me. It's terrible. We have to take care of ourselves. Go see a doctor. Get yourself checked. A lot of guys don't do that. A lot of people, they don't eat right, or they abuse their bodies with drugs and pills or alcohol, or whatever. We're not immortal."

On whether he would want to die onstage or retire from playing music at some point:

Lombardo: "Retirement is not an option. I believe a true artist… a true musician does not contemplate retirement. How can you do that when it's something that lives in you? I cannot myself ever retiring. I see myself playing drums when I'm 80. No. I feel music is a constant evolution, and I feel like art is as well — it's constantly evolving — and I don't feel my life and my career slowing down in any way anytime soon."

On whether he believes that thrash metal music in 2016 doesn't have the same energy as it did back in the early days of the genre:

Lombardo: "Yeah, it doesn't. The musicians are more… As they get older, they are more tired. They're having too much to drink the night before, and when they're writing music, they're not writing as aggressive — as they get older. And I feel you need to fight that; you need to go against the effects of the age. So what I do is I try to go to the gym. I still listen to aggressive music. I like soft music — I listen to jazz; I'm into jazz, I'm into classical, I'm into avant garde and all styles of music — but I believe that listening to hardcore, that keeps you young, aggressive and alive."