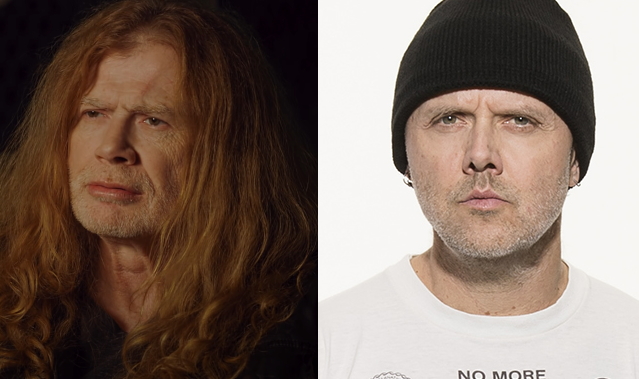 DAVE MUSTAINE Doesn't Understand Why LARS ULRICH Took On NAPSTER: 'Does He Have Enough Money? Probably'

A short segment about the rise of the pioneering music file-sharing service Napster is included in the recently released HBO documentary "Woodstock 99: Peace, Love, And Rage" about the disastrous music festival held on a July weekend in 1999 which devolved spectacularly and ended in riots, looting and sexual assaults. Organizers of the festival were interviewed for the project as were a number of musicians who participated in the event, including MEGADETH's Dave Mustaine.

Speaking about METALLICA drummer Lars Ulrich, whose band's image took a tremendous beating in the eyes of music fans after the San Francisco Bay Area heavy metal giants launched legal action against Napster in 2000, Mustaine said: "For me, see, I remember back when I was in METALLICA that we used to trade tapes. That's how we even discovered bands. I don't know. I can't blame Lars for doing the things that he does. Who knows why a guy does that? I mean, does he have enough money? Probably, right?"

This is not the first time Mustaine has discussed Napster. In a 2012 interview, Mustaine stated about the controversial file-sharing app: "Myself, I think the dude who created Napster probably ruined hundreds of thousands of people's lives because of that peer-to-peer file transferring, but if he hadn't done it, there are plenty of smart people out there who would have. It's human nature."

METALLICA sued Napster after the band discovered that a leaked demo version of its song "I Disappear" was circulating on the pioneering music file-sharing service before it was released.

In May 2000, Ulrich famously delivered a literal truckload of paper to Napster Inc., listing hundreds of thousands of people who allegedly used the company's software to share unauthorized MP3s of METALLICA's songs.

In a 2017 radio interview, Ulrich was asked if there is anything he would have done differently in METALLICA's legal dispute against the file-sharing site. "To answer your question directly, I think we would have educated ourselves better about what the other side were thinking and what the real issues were," Ulrich said. "'Cause you've gotta remember, this started out as a street fight. This wasn't about the future of music, this wasn't about the music business, this had absolutely nothing to do with money. This was a back-alley street fight.

"Cliff [Burnstein, METALLICA co-manager] calls one day and says… We were working on a song for this Tom Cruise film, 'Mission Impossible II', called 'I Disappear', and we recorded it in between some touring commitments, and it was gonna be held back till the next summer. And so one day I got a call from Cliff saying 'I Disappear' is being played on 20 radio stations across America, and we're, like, 'How the fuck is this possible?' And he said there's something called Napster where people can go and share. And we're, like, 'How the hell did they get 'I Disappear'? It lives in our vault somewhere.' And so we traced it back to this company Napster, and as you did in those days, it was, like, 'Well, let's go fuck with Napster then.' So just like these five bright lights on me, and I can't actually see any of you guys, all of a sudden, we were caught in these lights and we're standing out in the middle going, 'Oops.' I guess Napster means a lot to a lot of people, and so we were caught a little bit off guard with that, and then we sort of had to figure out how we were gonna play it."

Lars went on to say that METALLICA was "totally pro bootlegging" around the time Napster was launched. "You could show up at a METALLICA gig, you could buy a ticket, you could bring in your own recording devices and you could stand on a platform and record METALLICA shows," he said. "You could bootleg them and we were totally encouraging of this. We were all tape traders, and we were totally pro all this stuff. But the thing that blew our minds about Napster was we couldn't wrap our heads around, 'Why did nobody from Napster call and go, 'Are you okay with us doing this?' Because then it was a conversation. But they did this without checking in with us. And that was the part that we couldn't understand, that was where I think we could have educated ourselves better about how all of this worked and what it meant to people, because all of a sudden, we were standing out there going… And then we were caught in a shitstorm and people were, like, 'METALLICA, they're really greedy and money hungry,' and it had nothing — nothing — to do with money whatsoever. It was just about, 'Wait a minute! If we're gonna give away our music, which we don't mind doing, maybe we should do it, or maybe somebody should ask our permission.' That was it. And then that back-alley streetfight went public and worldwide and then we were completely caught off guard."