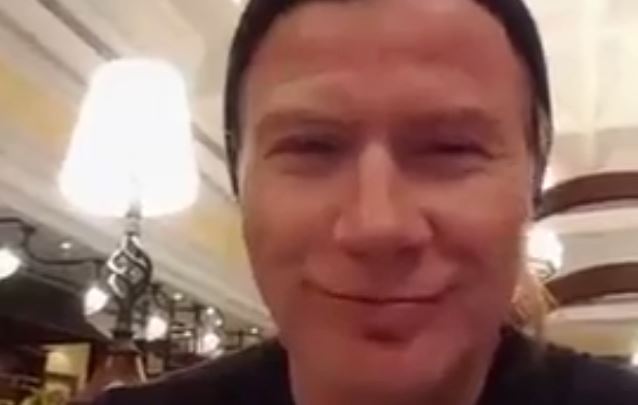 MEGADETH mainman Dave Mustaine has refused to apologize for posting a video message in which he slammed his former guitar tech as a "total waste of skin and life" after an apparently less-than-ideal show on October 21 in Brisbane, Australia that resulted in the tech being "fired."

While chatting with fans yesterday (Saturday, October 31) via Periscope, a live video streaming platform owned by Twitter, Mustaine clarified that his longtime guitar tech Willie Gee was not the tech he was talking about after the Brisbane concert. He explained (see video below): "Willie Gee hasn't worked for me since April, so… I love Willie; we're still very close friends. He's just retiring."

Mustaine went on to describe the events that led to his former tech getting fired. "What happened? The guy lied to me," the MEGADETH leader said. "He gave me a guitar that wasn't plugged in or turned on two times and unplugged one time, and you know what? That's just not acceptable. I wish I didn't say it the way I said it, but I'm not gonna apologize."

He continued: "But you know what? I forgive him. And I still like the guy. It's just one of those things. Actually, if I see him again, I'm not gonna hold a grudge and I'll probably give him a hug and thank him for trying."

Asked how he noticed his guitar wasn't plugged in, Mustaine responded: "Well, 'cause it was making all kinds of sounds from the cord hitting the body of the guitar and nothing coming out from the fretboards."

He went on to say: "Yeah, I totally forgive the guy. You know what? I don't hate him. I was mad. I had been drinking wine during the set, and after a couple weeks of just problems and stuff like that, I finally had enough. But I forgive him, and I think it was very brave and bold of him to come out and try to work with us. And he did help us out with the stuff that he knew how to do. It's just… It's a very complicated gig working and doing all those punches and stuff like that nowadays. And the thing, too, is he's a bass tech; he wasn't a guitar tech, so… But I'm sure he's happy. You know, it was very stressful for him."