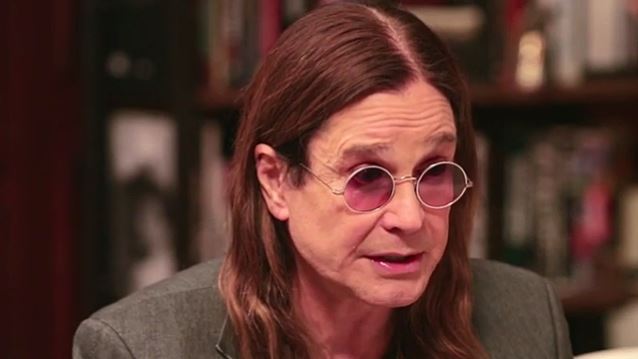 In an interview with Billboard.com, Ozzy Osbourne has revealed that he and his son Jack have been filming in England for a new project for the History channel. He explains: "[It's] like a father-and-son spoof on history. We went to Stonehenge and met a guy who thinks he's the fucking reincarnation of King Arthur. And we went to Bletchley Park to see the machine [Alan Turing] used to break the [German] code. We're going to Mount Rushmore, to the abandoned silos where America used to have their Minutemen missiles and all that. It's educational for me, actually — history with an Osbourne slant."

Ozzy and Jack were spotted taking part in filming at Portland Bill on the Island of Portland in Dorset, England on September 30. According to Bournemouth Echo, the pair then accompanied the TV crew to a local restaurant.

Ozzy, Jack and the rest of the Osbourne clan became pop culture icons when their reality series, "The Osbournes", became a monster hit for MTV when it premiered in 2002. Ozzy later admitted he was using drugs and alcohol during almost the entire three-year run of the show.

A variety show starring the family, "Osbournes Reloaded", debuted in March 2009 on Fox and was canceled after one episode. A revival of "The Osbournes" on MTV in 2015 never made it to the air.

Ozzy told The Pulse Of Radio a while back that he was not a fan of appearing on television. "I gotta be honest, I'm not really keen on TV," he said. "I mean, I must have watched, like, two episodes of 'The Osbournes'. I just don't like watching myself on TV, I feel geeky."

Ozzy played last night (October 31) at the Voodoo Music Experience in New Orleans and is scheduled to appear at Ozzfest Japan in Chiba, Japan on November 22.

He is also working on a new solo album, which the head of his record label described in August as "really special."

Ozzy will also head out on a farewell tour with SABBATH beginning on January 20, 2016 in Omaha, Nebraska.