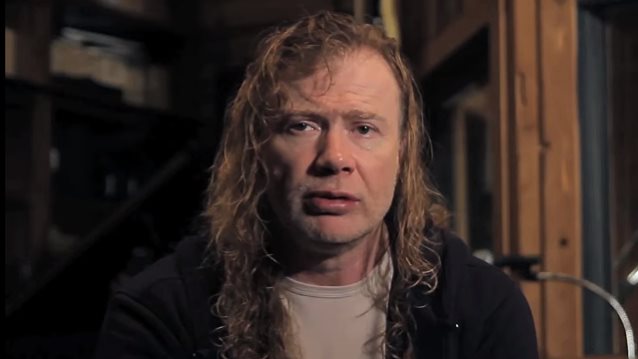 DAVE MUSTAINE: 'Some Metal Bands Have Completely Lost The Plot When It Comes Down To Melody'

Speaking about where MEGADETH's upcoming album, "Dystopia", fits in the band's catalog in terms of melody and overall aggression, Mustaine said: "Well, there is some melody. It's not overwhelming in the melody department."

He continued: "I think that some metal bands have completely lost the plot when it comes down to melody and then it's all about aggressiveness and trying to hack up a fishbone. So, for me, I still try and sing. And I think that being in Drop D tuning has made it a little harder for us to keep the melody stuff going, because some of the articulation of the picking, when it's tuned that low, you can't really make out the notes. It certainly isn't as bad as being in C tuning or something like that. And I still think my right hand is fully functioning. My left hand was the one that was injured in the surgery, and that one seems to be working pretty well too."

Mustaine added: "I think that if you look at what the colors of some of the different records have been, my records have all been a slideshow of my life. I've shared everything with you guys: what I'm going through at the time, how I've gotten over it. I think that battling my demons and victories over them has really helped a lot of people out there. Maybe not you, but I know a lot of other people have been helped by it. In fact, I was talking to someone last night who asked me how that happened. And I've gotta tell you: I couldn't have done it without your support."

"Dystopia" will be released on January 22, 2016. The follow-up to 2013's "Super Collider" marks the recording debut of MEGADETH's new lineup, which includes Brazilian guitarist Kiko Loureiro, best known for his work with ANGRA, and LAMB OF GOD drummer Chris Adler.

Mustaine recently told Heavy magazine about the inspiration behind the new MEGADETH album title: "I've had this outlook for a long time that the world is a really good place with some bad people in it. Others might think the opposite. But I think if you were to take a consensus of people, they know the difference between right and wrong. People have manners and morals but lately there's been a decline in how people treat one another. That's where 'Dystopia' comes in, and if people don't start loving each other and helping those in need then when that becomes more important than power, fame or money then I think we're going to be okay."