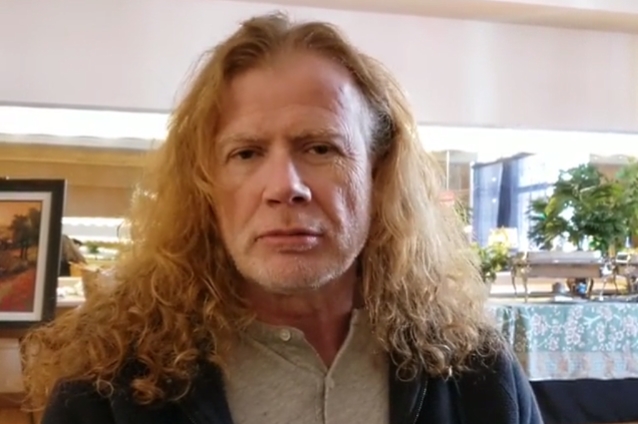 DAVE MUSTAINE To Use Wah-Wah Pedal Live For First Time: 'I've Been Apprehensive Of Using One For Obvious Reasons'

MEGADETH's Dave Mustaine will use a wah-wah pedal live for the first time during tonight's (Tuesday, March 12) "Experience Hendrix" concert at the Tivoli Theatre in Chattanooga, Tennessee.

Mustaine revealed his plan in an Instagram video message earlier today. He said (see below): "Tonight's gonna be the first time I'm ever gonna use a wah-wah pedal live. I've been really apprehensive of using one for [chuckles] obvious reasons and people overusing them. So I've found that this 'Experience Hendrix' tour has gotten me out of my comfort zone, and it's been really good for me as a player. So I'm gonna give it a try. I don't know how it's gonna turn out, so if you're here, you'll find out. If you're not, check back later and see. But I'm really excited about it. And if you're a guitar player, I just wanna encourage you to get outside your comfort zone too. And come and check out the 'Experience Hendrix' tour."

Some fans have since speculated that Mustaine's "obvious reasons" reference was a subtle dig at his METALLICA replacement, guitarist Kirk Hammett, whose most iconic trait of all is his beloved wah-wah pedal.

"To me, the wah-wah is a lot like the human voice," he said. "It isn't so much about the 'wah-wah' sound, it's being able to manipulate the tone however I feel it in that moment. It actually creates a better connection to the deeper part of me. And [Jimi] Hendrix wasn’t actually the first person I heard use a wah-wah pedal — that was Brian Robertson from THIN LIZZY." Recalling that life-changing moment, he went on: "The first time I became aware of it was the song 'Warriors' on 'Jailbreak'. He comes in with this totally wah-ed out two-three notes, and I said to my friend, 'What is that?!’ He said, 'That's a wah-wah pedal.' 'Wow, fantastic!' I made a mental note of that…"

Mustaine is taking part in the 2019 edition of the "Experience Hendrix" tour. The 30-date trek, a celebration of Jimi Hendrix's legacy and musical genius, kicked off in Pompano Beach, Florida on March 3 and will run through April 6 when it finishes in Wallingford, Connecticut.

Since its inception as a single tribute show at the Rock And Roll Hall Of Fame in 2000, "Experience Hendrix"has become an anticipated fan experience.