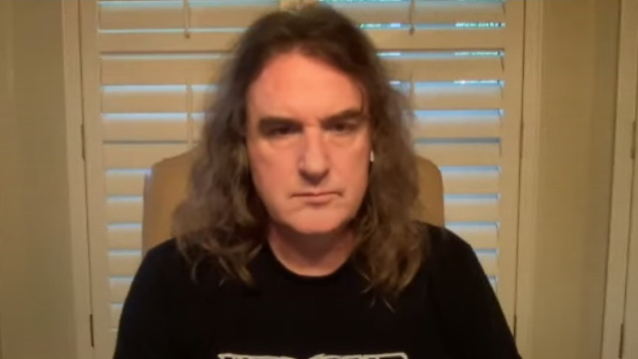 Former MEGADETH bassist David Ellefson, along with the other three members of his new project THE LUCID, were interviewed on the latest episode of "Aftershocks TV". Asked if he now feels the "freedom" to do whatever he wants to do musically which he didn't have prior to his most recent exit from MEGADETH, Ellefson said (as transcribed by BLABBERMOUTH.NET): "Well, look, [MEGADETH is] always gonna be my legacy, just because I helped start that… So that's a different kind of entry point. But honestly, I've always been free and I've always been exploring. I think probably the first 20 years, up until 2002, when that band officially disbanded, everything was always for that one singular cause. And then one day, unexpectedly, that ended. And I think my exploration of what does life hold next started in 2002. I didn't wanna put another band together after that. I actually swore off bands. [Laughs] I was, like, 'That's it. I'm done.' I did one. We went to the top. I know what it takes to get there. It's a lot of hard work, a lot of just dumb luck, a lot of landing in the right place at the right time and just a lot of really unexplainable elements that make any of that happen. And I just thought, 'That was a once-in-a-lifetime thing. It'll never happen again. If I get asked to join something, I'll consider that. But otherwise, I think now I'm just gonna make music for music's sake and just do it because I enjoy it, because I like it.' And that was when the F5 thing came together, about a year later. Then those guys kind of invited me over to jam with them, to be honest with you, and we hit on something and made some great music together. I told those guys, 'Don't ever plan on making any money in this. Let's just do this for free and for fun and just 'cause we love making music.' And I neeed that, to be honest with you. I needed to just kind of get the joy back into music and playing and just kind of connect with why I fell in love with rock and roll and playing bass and getting in a room with dudes and making music again. And then, the last years or so, back at the big dance and doing that."

He continued: "But, honestly, the 2000s, having that time away to just kind of reinvent and just, again, fall in love with making music again, to me, that has always been there. And I've been active — I've been active making records and doing stuff these last bunch of years anyway. And I wouldn't say out of necessity, because, honestly, I've been okay to not have to just go make music for money, but to make music for fun, which has been nice… To work with various people around the world, making music, honestly, I just really do it for the enjoyment of it. That's been a blessing, to be able to do that.

"I think when you're young and your back's against the wall and you don't have any other options, that's a great motivator to really lock in and kick ass," Ellefson added. "And I think we all needed that when we were younger. I think now to be able to do it because we like doing it and to maybe be a little bit more selective of the things that we do is kind of the freedom that you're allowed because you spent those earlier years nose to the grindstone.

"For me, look, I'll always make music. And to be honest with you, I don't force it. I leave a bass and some guitars and a piano and stuff out here in the house. Some days I'll walk by and go, 'Eh, I'm not in the mood for that tonight,' and just go on. And I'll feel no regret. And other days I'll walk in and I've got this bass plugged into a little Marshall stack and I'll just pick it up and I'll just freakin' thrash and rock out and I'll just write stuff and I'll record it on my phone. And I'll just catalog ideas or sit around and write lyrics and just kind of keep ideas flowing. 'Cause whenever I go into a session or any kind of a writing environment, I like to walk in with some stuff, to have some things.

"It's fun to create for creation's sake and not because it has to be motivated from anything else," David said. "So I guess I'm kind of glad to just be right where I'm at. To be honest, I'm perfectly content and happy where I am right now. I'm not gonna lie — it's perfectly fine. So I'm all good."