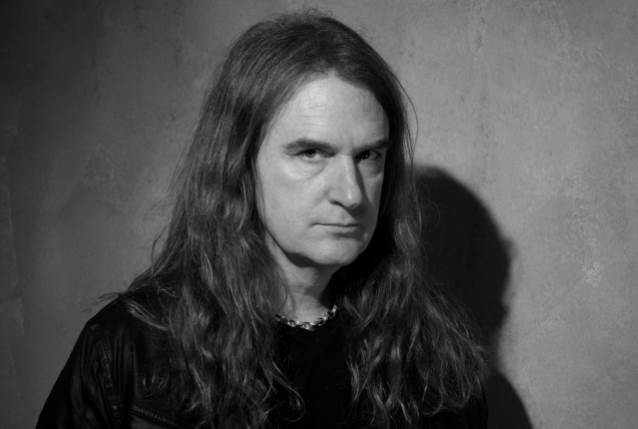 In a new interview with "The Jeremy White Podcast", David Ellefson once again opened up about his dismissal from MEGADETH six months ago, just days after sexually tinged messages and explicit video footage involving the bassist were posted on Twitter. At the time, Ellefson released a statement on Instagram denying all social media chatter that he "groomed" an underage fan. He also filed a report with the police department in Scottsdale, Arizona alleging unlawful distribution of sexually explicit images of him by unknown offenders. In the report, Ellefson admitted that he had been exchanging sexual text messages with a Dutch teenager, who captured a video of several of their virtual "masturbating encounters" without his consent and shared them with friends. (According to Ellefson, the woman was 19 at the time of their first virtual sexual encounter.) Ellefson, who lives in Scottsdale, first became aware of the video on May 9, when the claim "David Ellefson of MEGADETH is a pedophile" appeared on Instagram. Ellefson told police he was notified on May 14 by MEGADETH that the band would be parting ways with him. Three days later, he was fired.

Speaking about the fact that he wanted to immediately come clean about the aforementioned virtual encounters and shoot down any inaccuracies about the exact nature of his relationship with the woman in question, Ellefson said (as transcribed by BLABBERMOUTH.NET): "That's why I addressed it the night it came out. Even though one side said not to," apparently referring to the MEGADETH camp, "my legal said, 'I think you should. I think you should just run toward the bullets, take the sword, deal with it, just address it,' which I did. And it was done and it was over. And then the next day when the other side started putting their announcements out, that's when it fanned the flames… The very thing they didn't want to happen is exactly what happened. And then I paid the penalty. Now I'm not in the band. So, go figure."

After host Jeremy White said that he blames MEGADETH leader Dave Mustaine for giving the story "legs" in the media by releasing a statement in which he said "there are clearly aspects of David's private life that he has kept to himself," Ellefson concurred, saying: "A hundred percent. It was all based on fear. It wasn't based on reality. They said all sides would be heard, and, quite honestly, no sides were heard. Because within two weeks, I went through the process that I told them I was gonna go through, to just walk through it and say, 'Hey, this is a bunch of bullshit,' and I did — I did my part. And I confessed my… [Laughs] Look, I was caught on 'Candid Camera'; there was no hiding from it. So you just address it. You take the sword. You deal with it. It was embarrassing. Sorry about that. Move on. And that's it. I pushed back against [the accusations]. [I said] 'This is bullshit.' And that's when I said [to the MEGADETH camp], 'Look, they threw a Molotov cocktail — proverbial — at my house and burned my house down. Would you please help me? Would you please support me? I could use some help right now.' And quite honestly, I was just kicked to the side of the road to just deal with it on my own. So it's, like, all right. Well, then now we know where the loyalties lie. And now we move on."

Asked why he thinks the MEGADETH camp did that to him, Ellefson replied: "I don't know for sure 'cause I've had no further conversations with anyone since then. But I can only go back to maybe the lawsuit I filed [against Mustaine] 20 years ago, me not being agreeable to just remix the catalog — those things, for sure. I'm sure this was a longstanding resentment toward me, and this was an opportunity to settle the score. And it is what it is.

"The truth of it is when you're in a band, when you're in any relationship — brotherhood, marriages, whatever — you have to agree to disagree, 'cause you're not always gonna agree on anything. And I think when things were reset 20 years ago — this was no longer gonna be a band; it was no longer a partnership; it was his [Dave's] way or no way. That was very clear. That's why I wasn't in the band 20 years ago when this happened. [Mustaine basically said] 'This is the way we're doing it. There is no negotiation. It's my way or the highway.'"

Pressed about whether he was "Mustaine's employee in a way" in the decade after he rejoined MEGADETH, Ellefson said: "For the last 10 years, I was an employee. And it's funny — to say that I was fired… I mean, I hadn't picked up a paycheck from MEGADETH since September 2020 when we did the photo shoot for the [new MEGADETH] album. So to say I was fired, I think, is a bit… Again, it's not like on the payroll getting a paycheck every week. Not rehired for the tour? Yeah, sure. I'll go with that. 'We're not rehiring you for the tour.' Okay. Fair enough. I wasn't getting a weekly paycheck from the group. When we worked, I got paid. When we didn't, I didn't. And then hence why I did a coffee company and a record company and all the other things to fill in the blanks and support myself and build up my own legacy for my family and to have things like that. Certainly those things, I think, were supported by management; I think they saw that if I wasn't gonna be… You can't expect for someone to be beholden to a company when you're not getting paid by that company in the 'off' time. I don't think Dave liked it. But it's, like, royalties buy loyalties, man. When you're all in and you're getting paid for everything, then, hey…"

He continued: "Look, for the first 20 years of the band, I never did anything [on the side]. I wrote a book and I co-wrote one song on a FLOTSAM AND JETSAM record. I didn't do anything 'cause when you're all in, you're all in. But when the group disbanded, and it disbanded in 2002 — it was not a hiatus; it was not taking time off; it was very clearly a disbanding — and when that happened, we were all left to our own. And it's that way to this day. It's kind of, everybody fends for themselves. When I came back 10 years ago, I was glad to be there, agreeable to be there, happy to be there for the fans, play the songs, to be part of the legacy. And look, clearly I put in another 10 years of gas in the tank. So it was a good thing. And that was always my attitude: do it for the love of the music, the love of just being there for all of it. And I was looking forward to that continuing, obviously. But I guess it's not what they want now."

Ellefson also addressed the fact that most fans incorrectly assume that hired musicians in bands at MEGADETH's level of popularity collect a paycheck even when they are not actively touring or recording.

"In Nashville, it's common when tours end, people file unemployment; it's just common," he said. "And over in rock and roll, that's not the common thing. Look, on some level, you're kind of like the handyman — you're called in to fix the pipe and clean the sink, and then when the job is done, you're out. For the last 10 years, when I worked, I got paid. When I didn't, I didn't. That's why, again, you see why I was so busy doing other things."